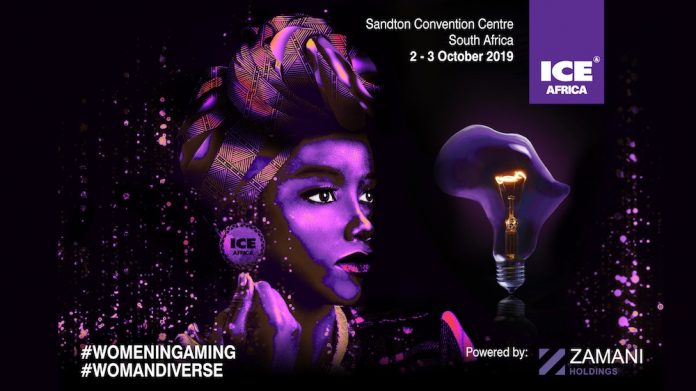 ‘Shining a light on Diverse Women within the gaming industry,’ is the theme of this year’s Women in Gaming initiative developed and organised by Clarion and sponsored by the South Africa-based Zamani Holdings, the parent company under which Ithuba, the SA National Lottery Operator Functions.

The campaign is running throughout August which is designated Women’s Month in South Africa and will culminate in a networking breakfast being held at ICE Africa and featuring leading women gaming executives from across the international landscape.

Women’s Month takes place every year and commemorates the 20,000+ women who marched on 9 August 1956 in protest against the extension of Pass Laws. Clarion Gaming is promoting the role of women within the industry via the #womendiverse social media campaign alongside a series of empowering interviews with women associated with this year’s edition of ICE Africa, including: Christina Thakor-Rankin, Co-Founder, All-in-Diversity; Amne Suedi, Principal, Shikana Law Group – Tanzania; and, Qhinaphi Sitsila, General Manager, Casino Association Of South Africa.

Explaining the significance of the campaign Alexandra Hamilton-Tomlinson, Marketing Manager responsible for the promotion of ICE Africa, said: “Clarion Gaming and the ICE brand looks to position itself as a leader in diversity and inclusion and we wanted to put our support behind this fantastic commemoration of women in Africa.  This year’s celebration highlights the contributions made by inspirational and motivational women to the gaming ecosystem on the continent of Africa. The women that we are featuring come from all sectors of the industry and the nations that ICE Africa supports including Nigeria, Ghana, South Africa and Kenya – to name just a few.”

She added: “We are of course delighted to be hosting the exclusive Women In Gaming breakfast on the second day of ICE Africa.  It will provide the perfect opportunity for delegates and attendees to meet some of the inspirational people that have participated in the campaign, to network and to talk all things Women In Gaming.  There will also be a series of educational and learning opportunities covering a broad spectrum of topical issues, including how diversity affects businesses drawing on the lived experiences of influential female gaming thought leaders.”

For more information on the first ICE Africa and to register, visit the ICE Africa website: www.iceafrica.za.com