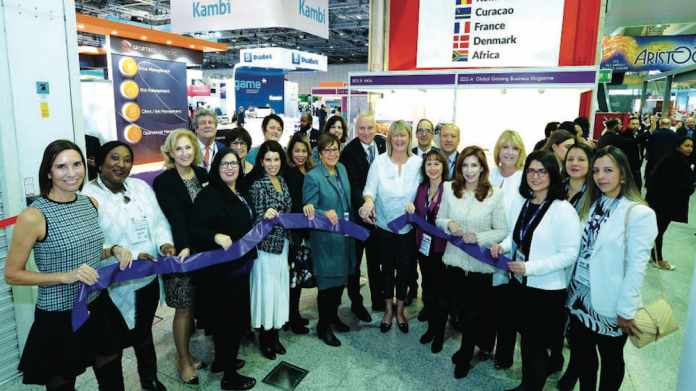 Following another record-breaking year at London’s ExCeL Centre, ICE has been nominated in three categories at the Association of Exhibition Organisers Awards.

ICE London, the biggest and most international B2B gaming technology event in the world, has been shortlisted in three categories at the annual Association of Exhibition Organisers (AEO) Awards, widely recognised as the Oscars of the events industry.

ICE London has been confirmed as a finalist in both the Marketing Campaign of the Year, Trade and Best Use of Social Media categories with marketing co-ordinator Beth Welcomme shortlisted in the Unsung Hero section.

Reflecting on the award nominations, Kate Chambers, managing director of Clarion Gaming, said:“It’s immensely gratifying to be shortlisted across three categories by our industry body, the AEO. Through a combination of hard work, creativity and the support of all of our stakeholders from throughout the world, we were able to once again grow ICE London. The 2018 edition was officially the biggest on record, hosting a total of 589 exhibitors from 65 nations, occupying 43,500sqm of net space and 36 of the 44 halls at ExCeL London. To continually improve across all of our key performance indicators requires a huge commitment from the entire team at Clarion Gaming and I am delighted that Beth Welcomme has been named as an individual finalist, which is a great achievement. We are up against some formidable events but, irrespective of the final outcome, I believe the nominations are a tribute to all of the gaming professionals who in 2018 made the journey to be with us in London from an amazing 153 nations. Few annual events, if any, have this breadth of trans-national appeal.”

The unique number of visitors attending ICE London 2018 was confirmed as a record 33,536, an 11 percent increase on 2017 and a landmark which constituted the seventh consecutive year of growth. Despite occupying an additional hall at ExCeL London, density also increased year-on- year, with the average number of visitors per stand up 17 percent and the number of visitors per square metre up 12 percent. The ICE London brand also demonstrated its unique ability to engage with gaming professionals based throughout the world, with the exhibition experiencing a surge of visitors from key growth regions, notably North America (+33 percent), Africa (+23 percent) and South East Asia (+18 percent).