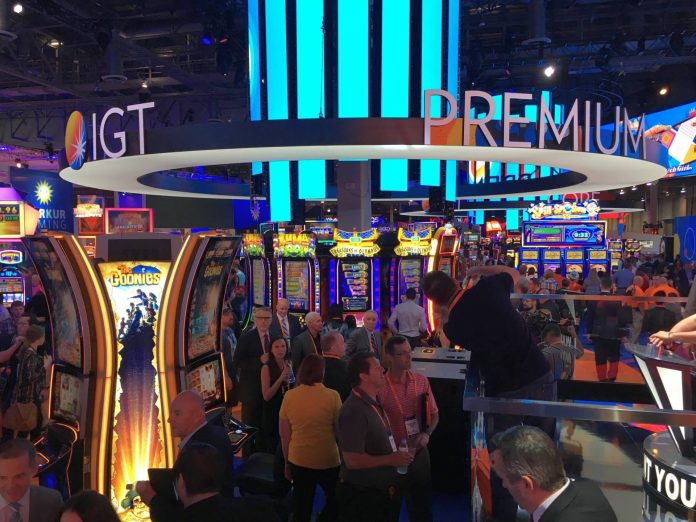 IGT will display a wide spectrum of content at G2E 2017, including new True 4D titles, in addition to large-format cabinets, a new version of the S3000 cabinet and its award-winning PlaySpot mobile solution.

Under the “Let’s Play” theme, the company will demonstrate a broad portfolio gaming solutions for G2E 2017, with a focus on introducing “compelling new content” with the aim of helping casino partners engage players.

A focal point within IGT’s stand will be its True 4D product portfolio. Anchored in Sphinx 4D, True 4D offers immersive gameplay through its use of 3D graphics combined with gesture recognition and mid-air haptic technologies.

For this edition of G2E, the company will introduce new True 4D titles on the CrystalCurve True 4D cabinet including the licensed theme Ghostbusters 4D.

The manufacturer will also showcase its extended game library for the CrystalCurve Ultra cabinet with game themes such as The Goonies Video Slots and Blake Shelton Video Slots.

Over on the Axxis 3D cabinet, a revamped version of Jurassic World 3D, along with new True 3D titles such as James Cameron’s Avatar 3D and Wheel of Fortune Wild Sapphires will be on display.

There will also be the chance to see IGT’s newly released large-format cabinets – the Megatower and S3000 XL.

Both cabinets are supported by player favourite game themes such as Wheel of Fortune Slots and IGT Pinball.

Additionally, IGT will extend the success of “Proven Performer” titles such as Big 5 Safari and Golden Egypt by introducing them in a single-screen format on the CrystalCurve cabinet.

IGT is building upon its leadership in mechanical reels with the ongoing expansion of its content library for the S3000 cabinet, while the company will also reveal a new version of the S3000 cabinet equipped with a spectrum meter.

At G2E, IGT will dedicate a portion of its booth to its new, single and multi-line Class II titles for the S3000 such as Double Topaz, 2x3x4x5x Ducks in a Row, and Wild Bill.

As the market leader in video poker, IGT will continue to introduce novel video poker themes aiming to put a new spin on a classic casino offering, including Wheel Poker, which leverages a virtual wheel in the game’s top box for added entertainment, and Stack the Deck Poker, a game that compounds the thrill and chances of hitting three, four and five-of-a-kind hands.

IGT’s PlaySpot mobile solution will be the anchor innovation of company’s interactive product portfolio at G2E.

The company will also spotlight its ever-growing content library of mobile games, including both new casual games and top-tier licensed game such as Breaking Bad and Baywatch.

As a leader in new and emerging gaming technologies, IGT will highlight a series of innovative gaming concepts designed to attract an expanded demographic of players to the casino floor.

IGT’s “Virtual Zone” will offer a dedicated area that highlights the company’s new virtual reality, tournament and e-sports betting applications, and will feature IGT games such as Arcade Saga and Tournament Archery.

There will also be a highlight on how the company’s location-based marketing technology can be coupled with other IGT systems solutions to maximise ROI and cultivate personalised marketing messages.

The company will also display a range of specialty gaming products including as skill-based games, VLTs, AWP solutions, interactive content and Electronic Table Games such as Dynasty Blackjack.