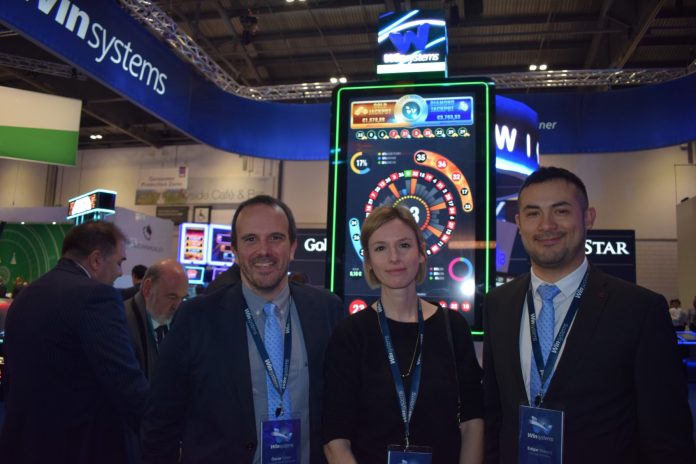 Win Systems set the ball rolling for a promising 2018 at this year’s ICE, displaying a new app for its WIGOS casino management system, and premiering two new additions to its Gold Club roulette range.

Win Systems celebrated another successful edition of ICE, with the company clocking up a range of new business leads both developed and confirmed across the three days.

“It’s been an amazing show for us,” said Oscar Giralt, corporate marketing manager at Win Systems.

“It’s been really busy, and driven by the new solutions we’re displaying, we’ve generated a number of business leads in both our gaming and systems divisions at the show.”

On the systems side, Win Systems demonstrated Winstats, a new addition to its established casino management system, WIGOS.

The app has been specifically designed to allow for casino management to track key real-time and historical data on their mobile devices while away from a venue.

“Winstats allows the casino management to have the key figures from the casino on their mobile device, helping them keep track of how their operations are performing in real-time, even while they are on the move,” Giralt explained.

“We’ve streamlined the app to clearly present the statistics executives need, but they can also filter the data by date or vendor.”

Another highlight at the show was Win Systems’ new Chinese roulette – launched under the its Gold Club brand – which differs significantly to the traditional Western version of the game.

“Chinese roulette still has 36 numbers plus zero, but its a new way to approach the game,” continued Giralt.

“We’ve introduced new betting options which are in tune with Chinese culture, based on the 12 signs of the Chinese zodiac, as well as the four basic elements of wood, fire, metal and water.

“Additionally, the bet table is laid out as a figure of eight, which Chinese culture considers an auspicious number.

“While it’s Chinese-themed, we’re not just looking at the Asia-Pacific market, but at the numerous Chinese and Asian players visiting casinos worldwide,” he stated.

“One of the strengths of the product is its flexibility, players have the new betting options available but they can still play standard roulette.”

The company also demonstrated the new Gold Club Ventura at ICE, a compact six-position machine featuring an ergonomic design which takes up only nominal space on the casino floor.

“From Holland to Argentina, limited space is a factor in many markets, and we saw a real need for a product to address this issue,” Giralt added.

“One of the key features of the Ventura is its compact size and small footprint, which makes it ideal for small to medium-sized venues, as it maximises the return on the space and allows for flexibility in terms of floor layout.”

The firm also presented the latest addition to its GameStar slot machine family, the GameStarArcadia, a new gaming machine orientated towards the Spanish AWP market.

“The AWP market is very strong in Spain and continues to grow, and Win Systems will be there to help operators write that success story,” Giralt concluded.