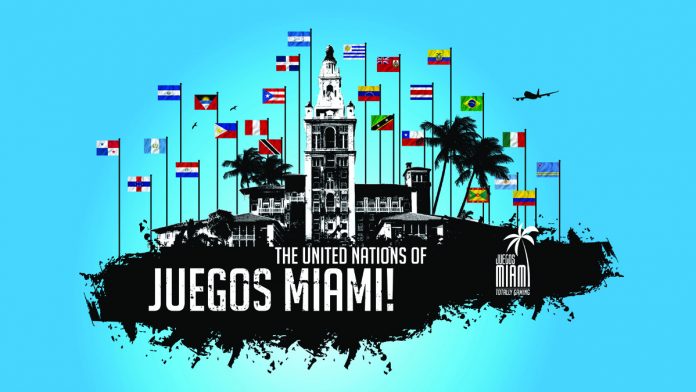 The Sunshine State was the platform for the gaming industry’s leading players to shine some light on high-growth Latin America markets during the first Juegos Miami event on May 31-June 3.

[dropcap]T[/dropcap]he inaugural Juegos Miami made its mark on the global gaming industry with the official launch of the show at the Biltmore Hotel in Coral Gables, Miami, on May 31.

The opening ceremony of the new Latin America-focused gaming industry convention was attended by over 400 industry leaders, alongside key representatives from Juegos Miami co-organisers, Clarion Events and Urban Expositions.

Away from the show floor, 55 internationally renowned speakers took part in the show’s conference and education programme, which covered multiple key issues relating to the Latin American gaming industry, including legislation, regulation and consumer protection.

Kate Chambers, managing director of Clarion’s gaming division and part of the team responsible for Juegos Miami, said: “The vision was to create a very unique event which would meet the specific needs of this incredibly important and dynamic market and from our first day I believe we’re on track to achieve this. “Juegos Miami is set to play a pivotal role to the Pan Latin American and Caribbean gaming industry and we’re immensely grateful to all the people have played a huge part in helping achieve this.” Attendees at the opening ceremony were invited to register with the Juegos Miami Founders Club, a network of influencers who have helped pioneer the creation of the event.

Speaking on the sidelines of the show this year, Charles Hiten, chief executive of Merkur Gaming Americas, said: “We felt that it was a great idea to explore, having a trade show directed towards Latin America and the Caribbean from Miami which is a beloved destination for many Latin Americans and has strong ties to the region.

“I also have to pay tribute to our former colleague Jens Halle who was very much a believer that something like this could work and for us it was a great thing to support.” Clarion Events and Urban Expositions have confirmed that preparations for Juegos Miami 2017 are already underway.

“Our brief from the broad cross section of stakeholders that we consulted with in the development process, was to create a unique event that brought something new, relevant and vibrant to this dynamic part of the gaming economy,” said Chambers. “We are delighted that across the majority of our KPIs we were able to make that original vision a reality.”

She added: “As we do with all of our events, we are working in partnership with our stakeholders to address and remedy any areas that require a different approach and that process is already underway. I am extremely grateful to the Latin American and Caribbean industry for having faith in us as organisers and for supporting Juegos Miami with such passion.”