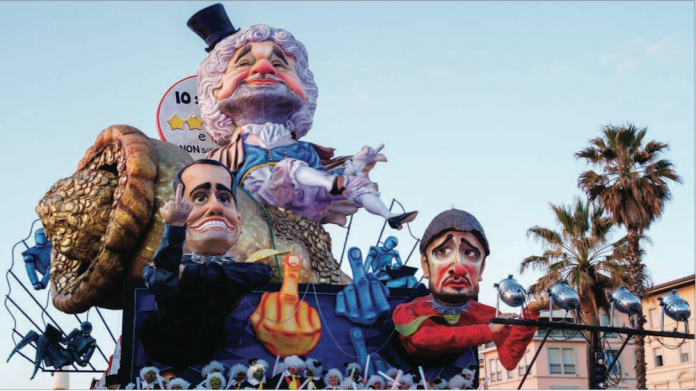 Warwick Bartlett Beppe Grillo wants to crackdown on the Mafia. Making gambling more expensive will make the illegal offer supplied by the Mafia more competitive. So their policy on gambling has not been thought through…

Italy’s hung parliament could spell trouble for the country’s  thriving gambling market, as the least likely of all alliances now looks to form a government.

The two leading parties from the election held on 4 March – The Five Star Movement with 33 percent of the vote; The Northern League with 17 percent – are about as different as they come, uniting around little more than a populist distaste for the centre, and a dim view of gambling.

Five Star – ostensibly anti-establishment, albeit widely considered to be closer to the left – found considerable popularity among Italy’s southerners with its moralistic narrative of corrupt elites doing clandestine deals with businesses. It is pacifist, environmentalist, and made plenty of noise about taxing private gaming firms during its campaign.

Whereas the far-right League, popular in the North is the more familiar force in contemporary politics – staunchly anti-immigration, anti-EU and anti-euro.

Five Star could theoretically form an alliance with the defeated centre-left parties, although centrists shudder at the prospect of propping up an inherently anti-politics movement founded by a polemic comedian.

Conversely, the League could find partners in the centre right, such as former premier Silvio Berlusconi’s Forza Italia. But even a coalition of the four right-leaning parties would fall short of the 40 percent needed to form a government.

The maths point to a bad outcome for the gambling sector, although analysts suggest expedience will likely push gaming policies down the list of priorities. While internal policy contradictions in some major areas could make a popular assault on the sector simply unworkable.

“The Five Star Movement have said they want to ban all gambling advertising and raise taxes on gambling to pay for a manifesto [which] I would describe as populism on steroids,” said Warwick Bartlett, CEO of consultancy GBGC.

“At the same time its leader Beppe Grillo wants to crackdown on the Mafia. Making gambling more expensive will make the illegal offer supplied by the Mafia more competitive. So their policy on gambling has not been thought through.”

The Northern League meanwhile would leave the euro and introduce a flat tax on income. The latter “could lower operator costs”, Bartlett conceded, but the combined effects of both would add considerable macroeconomic strains.

“Lowering taxes and spending on the manifesto pledges will lead to a sell off in the bond market, and Italy needs to borrow more not less,” he added.

“Italy faces many problems: immigration, budget deficits, sluggish economy, youth unemployment – gambling should not be the immediate focus for some months at least.”

For Rome-based gaming lawyer Stefano Sbordoni, the industry can perhaps find silver linings in the “inconsistencies” of both policy platforms.

“Five Star have utilised the anti gaming policy to raise their audience,” he noted. “But now that they will have to deal with debt and state income, they will possibly relinquish on that.”

Moreover, as negotiations between the two parties progress, it seems the right “will have title” to the major ministries; “the key one for the gambling market” being Economy and Finance.

As the right wing has already governed, he said “they are aware of the importance of this sector. Especially the amount of income that it brings to the state.”
Outside of a League-Five Star deal – which may or may not include Berlusconi – the only other option on the table is an agreement between Five Star and the centre left. But this is deemed “very improbable” and “against nature.”

“The outcome is highly unpredictable, and the risk is that gaming remains hostage of local authorities that have no competence to deal with more relevant issues,” Sbordoni warned.

“The hope is that behind the scenes other less flamboyant actors will contribute with sound suggestions to form a plausible government.”