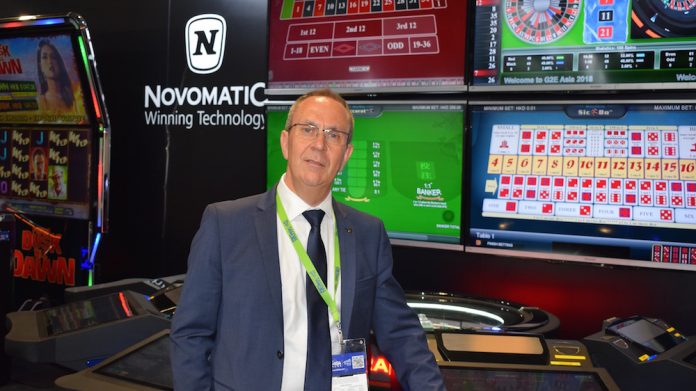 International Casino Review caught up with Lawrence Levy, Novomatic’s VP of Global Sales to discuss where the focus will be for the company in Asia for 2018.

“Novomatic’s presence at G2E Asia comes at an exciting time for us as a company,” said Lawrence Levy, VP of Global Sales.

“In the past 12 months we’ve invested heavily in creating a product portfolio which will appeal to the Asian markets and which we strongly believe is going to work well in the region.

“We’ve got a lot of single games with a slightly lower volatility and more bonuses, along with standalone and linked progressives which we’re showing for the first time in Asia. It’s very exciting and we’ve had a lot of interest.”

First presented at ICE back in February, the company’s two new cabinets – the Panthera Curve 1.43 and V.I.P. Lounge Curve 1.43 – made their Asia debut at the show.

Both cabinets boast a 43” curve screen that delivers a variety of single and multi-game content in 4K quality.
A total of six new games were presented on six Panthera Curve 1.43 cabinets connected to the Enchanted Fortunes Linked Jackpot, Novomatic’s new linked progressive which was also demonstrated in Asia for the first time.

“We have very high expectations for Enchanted Fortunes, we’re now readying it for various international markets and have already received a number of advance orders,” added Levy.

Novomatic’s electronic table games (ETG) presence in Asia continues to increase, and reflecting this, the company presented a Novo Line Novo Unity II installation as well as Lotus Roulette Pro at the show.

“Our first major ETG customer in Asia was‎ Genting Group, we now have around 600 terminals at Resorts World Genting and another couple of hundred in their property in Singapore,” Levy explained.

Reflecting the growing popularity of Novomatic’s EGT products in Asia, the company is currently in the process of making a Novo Unity II stadium installation with 125 terminals at an integrated resort in Vietnam.

“Alongside this, we’ve also provided 30 percent of the slot floor and the casino management system for the whole property – that’s something we’re very proud of.

“It’s important to be able to offer operators in Asia the whole Novomatic package and installations such as this reflect the increasing inroads we’re making in the region.”

Rounding out Novomatic’s G2E Asia presentation was the Otium OT300 video bingo cabinet, demonstrating new games and jackpots with an eye to the Philippines market.

“We’ve been developing the Otium OT300 cabinet primarily for the Philippines, aiming to build on the popularity of video bingo in the country,” stated Levy. “This has now been GLI-certified, it’s TITO-ready, and comes with a variety of games.

“So we’ve got exciting machines, we’ve had really positive feedback, and we have good expectations for the year ahead,” he concluded.