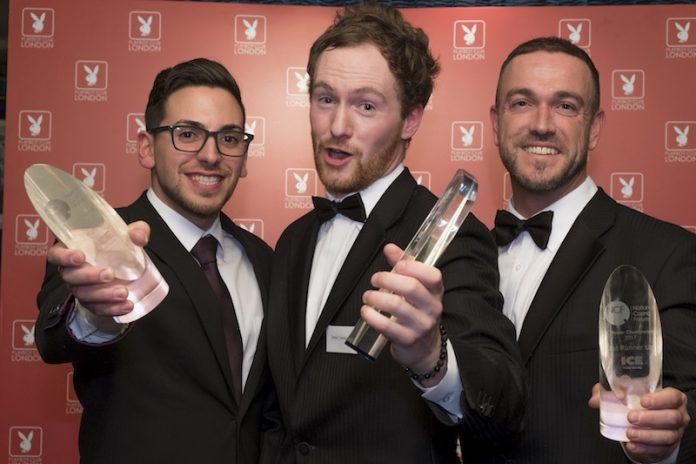 This year’s winner of the ICE Trophy at NCF’s UK Dealer Championship has been announced as Jamie Cummins ahead of the European Final in May.

Jamie Cummins of The Ritz, London, has been crowned the ‘best croupier in the business’ following his success in the National Casino Forum hosted annual UK Dealer Championship held at the Playboy Club London.

Jamie, together with first Runner-Up, Stuart McCallum of Les Ambassadeurs, will now go forward to represent the UK in the prestigious European Dealer Championship being held at The Hippodrome Casino London, Leicester Square, on the 9th & 10th May.

This will be the first time the European Final has been held in London and will comprise 32 participants from 20 countries.

The UK leg featured a series of tasks including technical skill, game control and hospitality, with talented dealers submitted from some of the biggest Casino operators in the UK, including The Hippodrome, Aspers Group, Grosvenor Casinos, The Ritz and Clermont Club.

The championships concluded with the announcement of the winners in the Playboy Club London’s famous Tale Bar with sponsors Clarion Events awarding the much coveted trophy and Rob Saucier, CEO from cash prize sponsors Galaxy Gaming, presenting the £2,000 top prize.

Kate Chambers, Managing Director of the Gaming Division at Clarion Events said: “As an organisation which is steeped in gaming and responsible for a number of leading brands, not least ICE Totally Gaming, which is the biggest gaming technology event in the world, I am delighted to be able to work with our friends and colleagues at the National Casino Forum and support this blue riband event.

“As well as providing a modern environment for international gaming organisations to conduct business, our remit is to recognise excellence and to reflect the exceptionally high standards of professionalism and skill within the industry. Congratulations to all of the participants and I would like to wish Jamie and Stuart the best of luck in May’s European Final.”