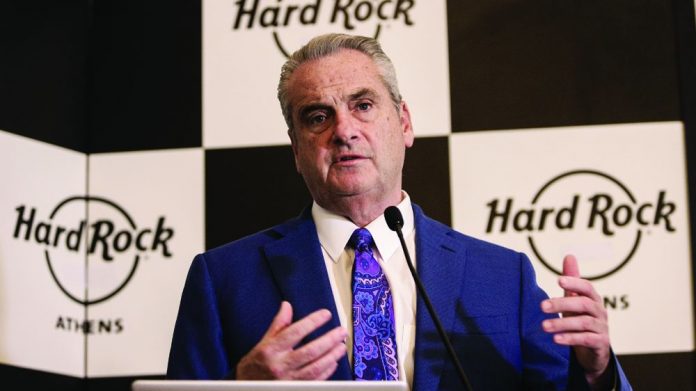 Hard Rock International has thrown its hat into the ring and is participating in the RFP process for a casino licence which will form part of the overall EUR8bn Hellinikon mega-resort development in Athens. The company’s chairman and CEO Jim Allen said it estimates that, if successful, its potential investment could be “significantly higher than EUR1bn”.

Hard Rock International has confirmed its participation in the Greek government’s RFP (request for proposal) process for a casino resort concession at the site of the former Elliniko International Airport in Athens. During a press conference at the Hard Rock Cafe in Athens in late August, chairman and CEO of Hard Rock International Jim Allen discussed the company’s vision for an integrated resort and casino which will form part of the EUR8bn Hellinikon mega-resort development.

“At Elliniko we want to develop an integrated tourism and entertainment complex that will be much more than just a box with slot machines and gaming tables,” he affirmed. “In our estimate, the whole investment will be significantly higher than EUR1bn.”

Allen also praised efforts by Kyriakos Mitsotakis’ new government to get the long-delayed process underway once again. “Things have really sped up recently. I’m very satisfied with the pace at which the new government and prime minister Mitsotakis are moving ahead with the process for the overall development of the former airport,” he said. “We have been talking about the project and the tender with the Greek state and the gaming commission, as well as with the concessionaire, for a year and a half now, and we’ve also been talking to collaborators in the country, and we are now on the final stretch.”

Back in July, the country’s new development minister Adonis Georgiadis reported that the government aims to streamline the regulatory process to allow construction of the Hellinikon project to launch before the end of the year.

“Normally, the financing scheme includes 40 percent equity and 60 percent borrowing, and that is about how we expect to move ahead in Athens. Loans will come from the usual sources, such as international banks, as well as from Greek banks if we reach an agreement, while we will probably be joined in the 40 percent equity participation by Greek groups, if that decision is reached,” he concluded.