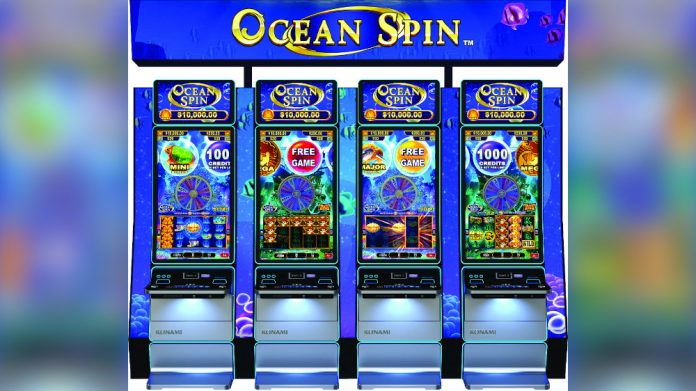 Offering a wide mix of bonus experiences for players, the linked jackpot series by Konami Gaming is now available in North America.

“Ocean Spin has shown an exceptionally strong arrival for initial casino sites in the US,” said Tom Jingoli, EVP and COO at Konami Gaming. “The game’s eye-catching wheel spin bonus, transportive play environment, and outstanding presentation on the casino floor, all come together for a winning slot entertainment spotlight.”

Konami’s Ocean Spin is the second premium series released on its Dimension 49J cabinet, which features a 49” J-curve display in 4K Ultra High-Definition (UHD). At the top of each game screen, animated bubbles float seamlessly across every connected machine, filled with potential bonus opportunities. During the game’s signature Ocean Spin Feature, the player is invited to spin the animated bonus prize bubbles by swiping across the large touchscreen display. Prize bubbles whiz across the entire bank or pod, until the spinner lands on a credit award, free games, or instant progressive jackpot with full screen celebration.

“This premium linked series offers a wide mix of bonus experiences for players, including unique symbol-driven events for each of the compatible base games: Kingdom’s Treasures and Pirate’s Riches,” Jingoli continued. “Konami is thrilled by the strong performance results and player response achieved with Dimension 49J, and we look forward to continued growth for this proven cabinet format.”