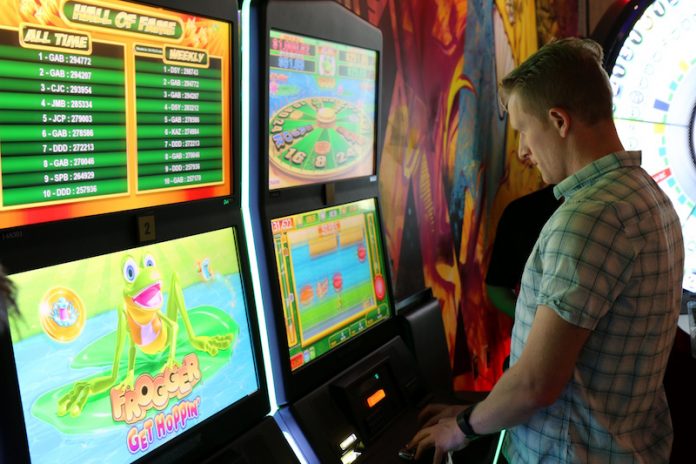 Konami’s Frogger: Get Hoppin’ Makes its World Premiere on the Las Vegas Strip.

Konami is the first manufacturer authorised for field trials under the Nevada Gaming Control Board’s New Innovation Beta (NIB) program, and the first to introduce skill-based gaming as the primary game play to the Nevada market for players to enjoy.

The game’s world premiere was marked by a competition on February 18 and 19 in which participants played to earn high scores and become the world’s first Frogger: Get Hoppin’™ champion. Over the two days, hundreds of competitors arrived to the event to navigate Frogger® through the road and river crossing course toward increasing scores and potential cash prizes.

“Considering Konami’s extensive heritage in consumer arcade and video game entertainment, we’re excited to bring that creativity and technology to the gaming industry in new ways and help pioneer the development of next generation gaming product,” said Tom Jingoli, executive vice president and chief commercial officer at Konami Gaming, Inc. “Thanks to the Nevada Gaming Control Board and the New Innovation Beta program, unique developments like Frogger: Get Hoppin’ can gather and react to early feedback—strengthening success for consumers, operators, and developers alike.”

Frogger: Get Hoppin’ is Konami’s first skill-based game development to arrive to casinos, and was among several next generation gaming concepts presented by the company at G2E. For a $2 entry wager, the game gives players the chance to win random cash awards and earn true skill-based cash awards. Top scores are recorded on daily and all time Hall of Fame leaderboard displays.

“We’re very pleased with the response we’ve seen to Frogger: Get Hoppin’. Throughout the trial and competition event an entire spectrum of player types have tried the game, but by far the largest audiences represented were those not traditionally engaged in gaming activities at the casino,” said Jingoli. “As this emerging sector continues to expand, players can look forward to connecting with new forms of gaming entertainment that reinforce their interests and social preferences.”