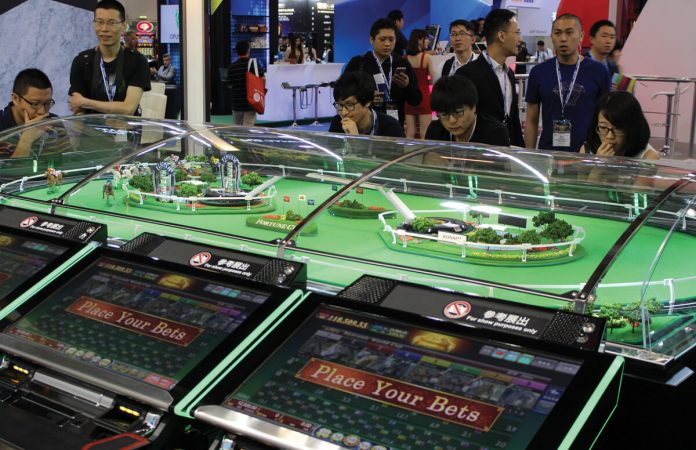 Leading casino gaming developer showcases an exciting mix of the latest titles across its proven Concerto™ Collection of video slots.

This February 6-8, an estimated 30,000 guests will have the opportunity to explore a record variety of progressive game styles spanning symbol-trigger, linked, wheel-spin, mystery-trigger, pick ‘em, and more – with leading flexibility and adaptable configurations for different market conditions.

Konami stand #S6-110 will have a full lineup of SeleXion® multi-game cabinets, including the ICE debut of SeleXion on its 43-inch curved Concerto Crescent™ with games such as Lotus Land Deluxe Wild™, China Shores Great Stacks™,  and Dragon Fury™ together on one machine.

“Building upon the expanded Concerto Collection with a new library of KP3+ games, Konami is delivering even more entertainment for every machine from Slant to Crescent,” said Steve Walther, senior director, marketing and product management.

“The depth of Konami’s creative bonus features and progressive mechanics on display is our most exciting ICE yet.”

Power Boost Inferno™ will be among the centerpiece progressive game attractions. This all-new linked progressive for Concerto™ upright and Slant allows players to activate more prize opportunities on a 3-round wheel-spin bonus at higher extra bet amounts.

In addition to its multi-denomination capabilities and bet multipliers, this series invites players to increase their bet level in order to expand a special reel area called the Strike Zone™ for additional bonus opportunities.

“Konami is bringing a rich array of progressive developments to ICE 2018 with a focus on long-term business value for operators and enduring entertainment value for players,” said Walther.

“This extends to our curved Concerto Crescent cabinet as well, with games like Lucky O’Leary Jackpots and Castlevania.”

Konami’s Castlevania™ themed slots are arriving to ICE for the first time this February. The game’s debut launch titles have a 4-level standalone progressive bonus in which players battle against fierce monsters and Dracula himself for a chance at the jackpot.

Lucky O’Leary Jackpots™ is another exciting release on Crescent, bringing Leprechaun’s magic to the machine’s elegant HD curved display for a rainbow of symbol-based jackpot adventure.

During ICE 2018, Concert Crescent will feature SeleXion multi-game functionality for the first time. Operators can custom select a mix of player-favorite Konami Crescent games for each machine, with the option to add a standalone or linked progressive. It offers a versatile solution to feature a rapidly expanding library of single screen game releases from Konami.