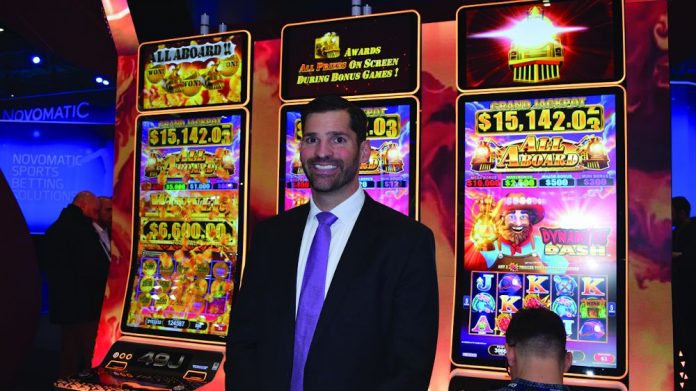 Konami debuted a new cabinet along with a compelling range of new content to this year’s ICE London, presenting the DIMENSION 49J cabinet with launch series All Aboard and Silent Hill, while the company also spotlighted the Treasure Ball and Ba Fang Jin Bao linked progressives for the KX 43 and Concerto Opus.

This year’s ICE saw the official show premiere of Konami Gaming’s new DIMENSION 49J machine, offering high-end 4K entertainment across a 49”, “J-curve” display, along with eye-catching overhead signage and lighted LED chairbacks. “One of the big things we’re presenting this year is our new DIMENSION 49J cabinet, which is our new premium cabinet.

We debuted it at G2E Las Vegas and we’re now showing it for the first-time in Europe at ICE,” said Greg Colella, VP of product management at Konami. “We’re launching the cabinet with a couple of game franchises.

We have the All Aboard series, featuring the unique base games Dynamite Dash and Piggy Pennies. This a group of games we developed in Australia and which have already been very successful.

“The Australian market is very competitive, but with All Aboard we sold 2,500 units in less than a year, so it was a natural choice to further expand our high-end product offering. “We’ve also brought the Silent Hill franchise – based on the well-known Konami video game series – to the 49J and based on some of the responses we’ve received from visitors to ICE, that’s already shaping up to be a solid success straight out of the gate.”

Konami is due to shortly make its first DIMENSION 49J placement in California, while the cabinet will be rolled out in Europe this spring. Meanwhile, Konami’s 43” screen KX 43 and 65” screen Concerto Opus cabinets showcased several of the industry’s highest performing slot series.

Treasure Ball is a top new linked progressive, with the ability to offer a mix of base game options to players through SeleXion multi-game. One of the highest performing core video slots on the market, Treasure Ball was inspired by classic toy capsule machines and can be recognised by its large globe of round mystery prize balls, which players can redeem and reveal during the bonus.

In addition, Treasure Ball can combine with popular KP3+ base games, including Lion Carnival, Chili Chili Fire and Sparkling Roses. “I’ve had a ton of customers asking me, ‘With the success of Treasure Ball can I offer it on the Opus?’ and the answer to that is, ‘Absolutely!’,” Colella added.

Ba Fang Jin Bao was another linked progressive series presented on the KX 43 and Opus. It features proven mechanics from Konami’s popular Cai Li Si Ji titles like Wealth of Dynasty, and delivers it in a single screen format with even more player bet options. Available Ba Fang Jin Bao base games, including Abundant Fortune and Fortune Totems, feature a progressive chance anytime a gold ingot symbol lands on the reels.

“Alongside this, we’re presenting new Triple Sparkle games – which we believe will be one of the cabinet’s big franchises – and another of my new link product, Diamond Trails. “This is also based on a successful idea that originated in Australia and will now be rolled out to customers in the rest of the world.

My philosophy is to try and bring together as many good ideas as possible and currently Australia is proving to be a very rich vein for creating exciting new content,” he explained.