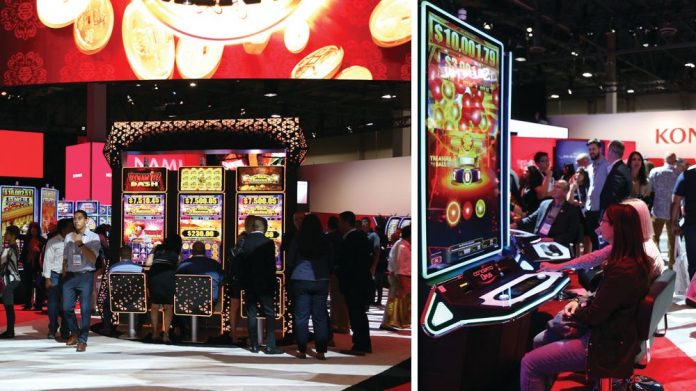 Casino Review caught up with Greg Colella, Konami Gaming’s vice president of games product management to discuss the highlights of the company’s G2E presentation, including the 65” Opus and KX 43 cabinets, along with the brand new Horizon series of cabinets which made their debut at the show.

Casino Review: Konami has recently expanded its big-screen Opus cabinet out to international markets. What games were you showcasing on the Opus at G2E?

Greg Colella: We’re in the process of rolling out Konami’s 65” Opus cabinet to international markets right now. The cabinet has already received a lot of positive feedback and G2E 2019 was no exception.

This year, we’ve started to develop a range of Opus-exclusive content and we presented two of these new titles – Treasure Lounge and Diamond-izer – at this year at G2E.

Diamond-izer is a classic gambler slot-style game, it includes traditional bars, fruit symbols, and diamonds, and also boasts an expanding wild feature. One of the ideas behind our Opus-exclusive content, is to offer titles which are a little bit more volatile, gambler-style games, and that’s where Diamond-izer fits in.

Alongside this, we’re also looking to debut new and novel gameplay ideas which really take advantage of the scope of a larger format cabinet, and that’s where Treasure Lounge comes in.

One of the cool things about Treasure Lounge is that it doesn’t use a traditional video reel slot mechanic. Instead it has Tiki heads that are positioned at the bottom of the screen and will rise up during gameplay. Depending on how high they reach dictates the prizes the player can win. Treasure Lounge also includes wheel and progressive features which creates a more interesting gameplay experience for the player. Overall it’s a very new and different style of game that really showcases a little bit of what we’re trying to accomplish with the Opus cabinet.

In addition to our new Opus-exclusive content, we can also run any of our KX 43 games on the Opus. With Treasure Ball doing so well, we’ve had a lot of customers who like the idea that they can put in a bank of KX 43 cabinets and have an Opus as an end cap.

So we’ve got a lot to play with in terms of content, and at the same time, we’re also starting to inject new content that is only available in this larger format. That’s part of the growth story this year for Konami.

CR: The KX 43 cabinet was also spotlighted at G2E. Could you tell us as bit more about it?

GC: The KX 43 was a key component in our G2E presentation this year. It has a 43”, edge-lit portrait screen and standard base width. With conveniences for today’s players, KX 43 offers a USB charging port, dual cup holders, and dual classic spin buttons. Multi-colour attract lighting stretches top-to-bottom across the entire length of the cabinet, and is specially-programmed to respond to game play events and bonuses.

With the KX 43, at G2E we were really trying to show customers the depth of our content library.

One of our biggest hits on the KX 43 right now is the Treasure Ball progressive game. Treasure Ball can be recognised by its large globe of round mystery prize balls, which players can redeem and reveal during the bonus. In addition, Treasure Ball can combine with most any KP3+ base game, including Lion Carnival, Chili Chili Fire, Sparkling Roses, and our popular multi-game SeleXion.

Naturally, it featured prominently on our stand and we received some very enthusiastic feedback from attendees.

Alongside this, we had Diamond Trails, which is a twist on the traditional hold and spin style game. Players collect diamond symbols which are stored in the top portion of the screen, and they try to make it up the trail, with the aim of collecting prizes. That was also particularly well received by visitors at G2E.

But that was just the start in terms of the content we had on show this year. We also had the Ba Fang Jin Bao linked progressive on display – that’s an Asian-style game, featuring multiple math models, which is starting to roll out now. Then we have another Asian-style follow- up product called Fortune Mint that made its first public showing in Las Vegas this October. It features two debut base games, mystery multipliers, symbol-driven jackpots, and eye-catching Asian-inspired art elements.

CR: I believe you were also demonstrating the latest updates to the SeleXion multi-game at the show?

GC: SeleXion has been one of our leading products for some time and we’re now in a position where we have it available on all of our platforms. So if somebody wants it on the Opus, the KX 43, a Concerto Crescent or Stack or the original dual-screen Concerto, they can.

The breadth and depth that we have with SeleXion really allows us a lot of flexibility in terms of meeting customers’ needs. If a client tells us they need a high-denom package for SeleXion – we have the technology.

One of the beauties of SeleXion is that customers really have the ability to customise what they want in that game pack – you can select the titles, you can select your price points, you can decide whether you want a progressive jackpot – that’s something that’s very appealing for operators.

We’ve now added SeleXion functionality to Treasure Ball. So you can have that Treasure Ball feature which is really turning heads right now, and you can put a SeleXion multi-pack underneath that and decide which games you want to play as you’re playing Treasure Ball.

CR: What were some of your other highlights at the show?

GC: We premiered our Horizon series of cabinets at this year’s G2E – the Horizon 49J offers a 49” “J” curve display in 4K Ultra HD (UHD) and is going to start making its way into the North American market by spring next year.

We debuted the 49J with a launch series called All Aboard, which was designed by our development team in Australia, and it’s already been very successful there. We’ll be moving that into North America first, but shortly we’ll start to bring it into South America too and then eventually into Europe.

Alongside this, we’ve got a new game based on Konami’s Silent Hill video game franchise – Silent Hill: Escape and Return – which we presented on the 49J.

Both launch titles feature a stay and spin mechanic which is particularly popular in the market at the moment.

So the 49J, together with the KX 43 and the larger format Opus, really rounded out our G2E showcase and represent some of our most compelling, complete and competitive product lines in recent memory.