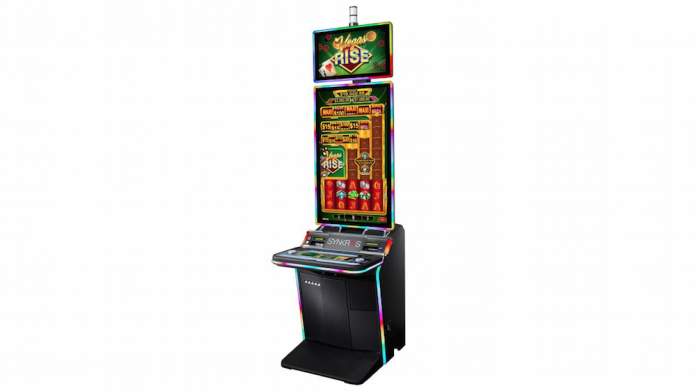 With a leading library of original linked progressive series—including Reels UpTM, Ba Fang Jin BaoTM, Chili Chili Fire Boosted Wins & WildsTM, and Triple SparkleTM—the new KX 43TM is delivering top play mechanics in a premium yet practical package, to provide the greatest entertainment value for players and properties. More than 6,000 tribal leaders and gaming professionals have the chance to experience KX 43’s complete debut lineup, as well as leading new game series available across the ConcertoTM Collection, from the big-screen OpusTM cabinet to the curved CrescentTM. NIGA 2019 also marks a landmark year for mobile system solutions through Konami Gaming, Inc.’s award-winning SynkConnectTM and SynkdotTM products, both of which are available to experience first-hand at Konami Booth #2131.

With a standard cabinet width, four-times the pixel depth of standard HD, and leading library of 4K-resolution game themes, Konami’s new KX 43 is designed as a trim-fit champion for any area of the floor. Its 43-inch, edge-lit portrait screen carries custom-programed graphic interaction with the LCD button panel, which is inlaid a relaxed slant top. KX 43 includes the core comforts and conveniences for today’s players, including USB charging port, double cup holders, and a classic bash button.
During NIGA 2019, KX 43 will showcase a competitive lineup of launch titles covering everything from symbol-driven linked progressives to original jackpot bonuses. A variety of game themes will be on display, all developed in 4K Ultra HD for graphics that catch attention and celebrate wins with stunning excitement.

Vegas Rise is among the debut launch themes of Konami’s new Reels UpTM linked progressive. This ULTRA REELS PRIMETM title features “up arrow” symbols across all 5 reels, which trigger the game’s Reels Up feature. Whenever the arrows land on reels 1 and 2, it causes reel 3 to expand upward for the chance to spin a bonus cash reel filled with instant guaranteed awards. Reel 4 and reel 5 also expand up into independent cash reels when arrows land in each of the preceding reels. All the bonus cash reels contain instant credit prize and jackpot opportunities, including the big supreme. Vegas Rise is multi-denom, integrated linked progressive that compatibly compliments Mayan Times, Expanding Egypt, and Hong Kong Lights in a variety of available bank and pod configurations.

Mayan Times is another showcase game in Konami’s new Reels Up linked progressive series. Rather than bonus cash reels, Mayan TimesTM features spinning jackpot wheels as the target outcome of the Reels Up mechanic. Whenever the arrow symbols land on 2 or more consecutive reels, then latter reels expand upward to potentially trigger the wheel-spin jackpot bonus. As players increase their bet amount, greater wheel-spin prizes become available for the player to unlock, including the $10,000+ linked supreme.