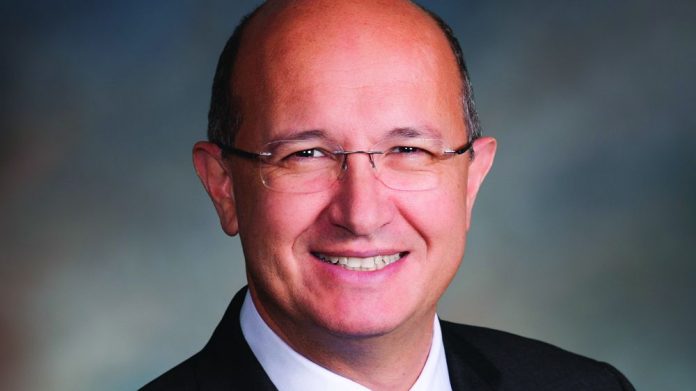 The big-screen Opus cabinet, along with the SeleXion multi-game and the award-winning KX 43 cabinet will be some of Konami Gaming’s stand-out products at G2E 2019 reports Eduardo Aching, VP of International Gaming Operations.

Casino Review: Konami has recently expanded its big-screen Opus cabinet to international markets. What response has it received?

Eduardo Aching: The international release of Konami’s 65” Opus cabinet has been met with strong performance. In many ways, Opus is the next evolution of our Podium Goliath cabinet, which saw strong popularity as the right size of an oversized cabinet, with great game content and reasonable floor space requirements. The Opus machine’s debut launch series, Triple Sparkle, has seen exceptional success by bringing back the popular Sparkle Feature from Solstice Celebration and Riches with Daikoku. The Triple Sparkle series features a unique betting structure that rewards players with a symbol-driven progressive chance when they bet max. Treasure Ball is another high-performing progressive game available on Opus. Inspired by the surprising fun of retro coin-operated toy capsule machines, Treasure Ball can be recognized by its large globe of round mystery prize balls, which players can redeem and reveal during the bonus. In addition, Treasure Ball can combine with most any KP3+ base game, including Lion Carnival, Chili Chili Fire, Sparkling Roses, and our popular multi-game SeleXion.

CR: What is the latest update with Konami’s SeleXion multi-game?

EA: SeleXion continues to deliver the industry’s most agile and customisable multi-game technology to Concerto Crescent, Stack, Slant, and upright. SeleXion’s expansion to the tall Concerto Stack and curved Concerto Crescent has provided a versatile solution for casinos to feature a library of single screen game releases, including Jewel Reward, Rising Koi, Mayan Chief Great Stacks, Lotus Land Deluxe Wilds, and Agent: Magnifying Jackpots. These titles can all be featured on one machine, giving players access to an entertaining variety of the latest games. SeleXion is also combining with Konami’s popular Dragon’s Law series for an an entirely new Dragon’s Law SeleXion pack on KX 43 and Opus. Dragon’s Law SeleXion showcases a pair of progressive jackpot games, each led by the long-tailed dragon first shown on Konami’s Podium cabinet. In Dragon’s Law Boosted, players can enjoy the familiar 5-reel game or select the “BOOSTED” button to double the lines with double the reel frame. In addition to the random wild feature that players enjoy, Dragon’s Law Boosted has a random progressive jackpot chance, including a $5,000+ Maxi. The SeleXion companion title to Dragon’s Law Boosted is Dragon’s Law Rapid Fever, which includes the popular Dragon’s Law mystery wild feature combined with a Strike Zone mechanic, from games like Star Watch Fire and Celestial Moon Riches.

CR: What other games will stand out at this year’s G2E Las Vegas event?

EA: Konami’s KX 43 cabinet will be a key showcase. It has a 43”, edge-lit portrait screen and standard base width. With core comforts and conveniences for today’s players, KX 43 offers a USB charging port, dual cup holders, and dual classic bash buttons. Multi-colour attract lighting stretches top-to-bottom across the entire length of the cabinet, and is specially-programmed to respond to game play events and bonuses. KX 43 offers a competitive lineup of exclusive launch titles – everything from symbol-driven linked progressives to original jackpot bonuses. Ba Fang Jin Bao is among the linked progressive series premiering on KX 43. It showcases proven mechanics from Konami’s popular Cai Li Si Ji titles like Wealth of Dynasty, and delivers it in a single screen format with even more player bet options. Available Ba Fang Jin Bao base games, including Abundant Fortune and Fortune Totems, feature a progressive chance anytime a gold ingot symbol lands on the reels. In addition, fans of Chili Chili Fire can experience the popular Fade Away Feature with an all-new jackpot chance in Konami’s new Chili Chili Fire Boosted Wins and Wilds, on KX 43 and Opus. When players bet up the button panel, they activate an array of boosted potential wins and wilds in each spin. By betting in this “boosted” range, all wins are multiplied by 2x, 4x, or 6x. In addition, all neighbouring wild symbols become stacked wilds or stacked wild jackpot symbols. When any stacked jackpot symbol appears entirely at the end of a spin, the corresponding jackpot is instantly awarded, with the sizzle and celebration that is expected for this fiesta-themed title.

CR: What are your plans for the rest of the year?

EA: Following this year’s G2E, we are focused on delivering these new products to most international customers we serve. We have the planning in place to deliver our latest games before the holidays, so casinos can fully capitalise on their busiest season of the year. In addition, Konami and its exclusive international distributors are preparing for a strong 2020. Players and operators in market around the globe can expect to see a strong variety of top entertainment and creative jackpot experiences.