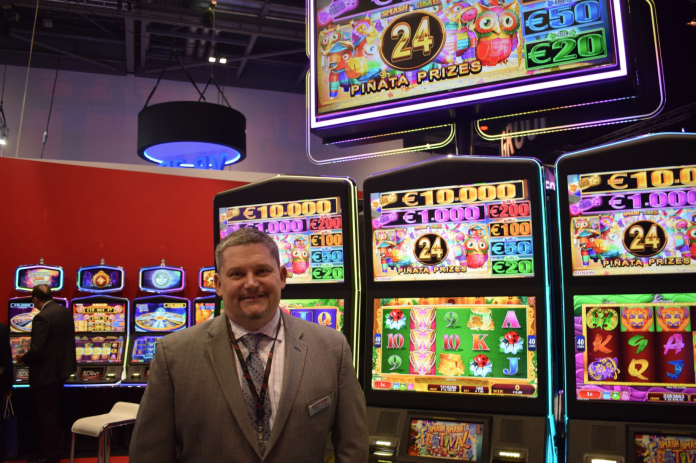 Power Boost Inferno was among the centrepiece progressive game attractions at the show. This all-new linked progressive for Concerto upright and Slant allows players to activate more prize opportunities on a three-round wheel-spin bonus at higher extra bet amounts.

Both titles offer advanced compatibility with the SeleXion multigame and combine with most KP3+ platform base games, including Chili Chili Fire and Dragon’s Law Twin Fever.

Also on display was Konami’s Cai Lai Si Ji pick ‘em style progressive series, which has already proven successful in markets around the world and has quickly become a player favourite thanks to its five-figure mega jackpot chance.

The series spans several custom base game titles and is available for the Concerto upright and Concerto Slant.

In addition to its multi-denomination capabilities and bet multipliers, this series invites players to increase their bet level in order to expand a special reel area called the Strike Zone for additional bonus opportunities.

Alongside this, the company presented its Castlevania-themed slots for the first time at ICE. The game’s debut launch titles, Castlevania: Valiant Guardian and Castlevania: Labyrinth of Love, offer a four-level standalone progressive bonus.

Players can win a maxi, major, or mini jackpot by collecting specially-activated wild pot of gold symbols of blue and red.

Operators can custom select a mix of Konami Crescent games for each machine, with the option to add a standalone or linked progressive, offering a versatile solution featuring a rapidly expanding library of single screen game releases, including Lotus Land Deluxe Wild, Dragon Fury, and Pharaoh’s Fury, which can all be featured on a single machine.

Egyptian-themed Pharaoh’s Fury is another 7-8-8-8-7 game which also has a progressive bonus option and carries a free game feature with bursts of extra wilds across the reel sets according to the number of trigger symbols.

International Casino Review: How has ICE been for Konami?

Steve Walther: ICE has been great. Even on the third day, every game on the booth has a crowd of people around it.

We’ve had visitors from Europe, but also Africa, Asia, Latin America and even customers from North America. I think this truly is becoming a world show.

Of course the focus is on the European markets because it’s in their backyard, but people are travelling and we’ve seen customers coming from as far afield as the Western US at ICE because they’re finding value in what the show has to offer.

From what I understand the attendance this year has made it the biggest show in the world, again, and its nice to be able participate in that and our customers are very happy to come and see our new products.

ICR: What have been some of the key products you’ve brought to ICE this year?

SW: We’re presenting our Smash Smash Festival progressive link at the show. It’s a unique concept where the prize pool progresses and you pick from various piñatas to win bonus prizes.

It’s rolled out in Europe over the last few months and so far the reception from the players has been phenomenal, and obviously that has communicated through the market, so people have come to the show to take a peek at it.

Alongside this, we’re demonstrating Power Boost Inferno, which is the follow-up to Smash Smash Festival. It’s an exciting progressive game where people commit to pointers around a wheel for a volcanic style bonus. Its linked and has five levels of jackpots, four stand alone, one is linked, and its got a lot of excitement and anticipation built into it. So those are two of the highlights at the show in terms of links.

We’re also showing a new game, Star Watch Magma on the Concerto Crescent, which features our new Strike Zone game mechanic. This allows the player to pick how many of the reels they want to identify as a Strike Zone, while the bigger the Strike Zone the greater the prizes they can win.

It appeals to a variety of different types of player – so if you’re just a light and casual player who wants to play and have time on a device – you bet the low end and you have a nice, smooth easy going ride; if you’re looking for more little bit more of a thrill, you bet the full Strike Zone, you have a bit more of a volatile experience.

So it really allows players to scale their experience to reflect their play style and what they’re looking for.

ICR: Progressives have increased in popularity in recent years, what’s driving this?

SW: It’s interesting, five to ten years ago it was a low hit, rapid, achievable progressive that was making waves, our Quick Strike was really strong in that regard in being capable of having an achievable top award jackpot happening frequently.

The trends now have moved towards having more aspirational jackpots.

Whereas, before, the philosophy behind the achievable jackpot was “this is going to make a difference to my play”, now we’ve extended it to where the idea behind the higher progressives is “I’m going to aspire to hit those because that’s gonna make my life better”. That’s where you see the change, it’s the emergence of the aspirational jackpot versus the achievable.

That said, I think you have to have a balance, because in addition to the aspirational jackpot, you need to have an achievable jackpot to match with it, because people still need to feel they’ve got a return. Not everybody’s going to win the lottery, so it’s important to give somebody that chance, and our products take that into account.