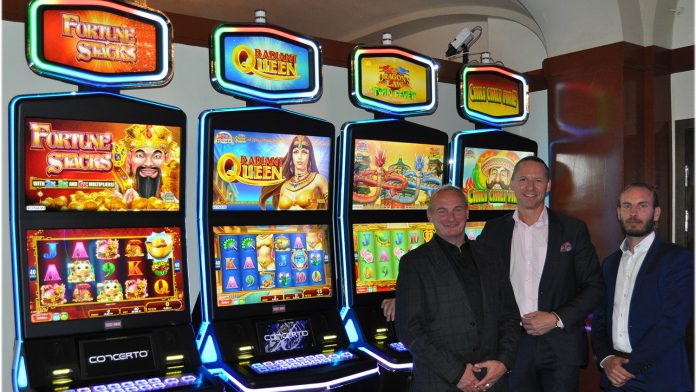 Following two agreements brokered by its European distributor earlier this year, Konami Gaming rolled out its latest video slots in venues across Sweden and Latvia.

[dropcap]K[/dropcap]onami Gaming has expanded its European footprint into Scandinavia and the Baltic as they introduce their latest video slot machines into venues in Sweden and Latvia following two agreements brokered earlier this year by ICM Casino Management (ICM), their exclusive distributor for the region.

The video upright machine comes with a range of debut themes including Chili Chili Fire, Dragon’s Law Twin Fever, and Radiant Queen, which will allow players to experience new bonus events, game mechanics, and special features for the first time. “The success of Concerto has reached Sweden for the first time and we are delighted that it has achieved a warm welcome here at Casino Cosmopol,” said Wolfram Dahlström, ICM’s CEO. “The KP3+ platform, twin 27-inch monitors, and digital topper provide a modern aesthetic that will give casino properties and their players satisfaction for years to come.”

“In addition, our slot technicians and attendants appreciate that the machines from Konami carry a quality and reliability that we can depend,” he added.

Also this August, Konami launched its first slot installations in the Baltic nation of Latvia, after ICM secured a contract with the Latvian-based gaming entity, Furors Klondaika.

Our collaboration has started very well, and we will do our best to sustain and enhance that in the future.

“Our first installations of Konami machines in Latvia are also our first installation ever in the Baltic States and we are very happy that Klondaika has chosen SeleXion,” added Dahlström. “Our collaboration has started very well, and we will do our best to sustain and enhance that in the future.”

Klondaika operates 32 slot halls across Latvia as well as a casino, and is set to introduce a selection of leading products from Konami’s video slot library, most notably the SeleXion multi-game cabinet.

“We are very satisfied with the performance so far and the SeleXion machines seem to be popular among our guests, and we are happy with the service and support provided by ICM,” said Karīna Vecums-Veco, slot manager for Klondaika.

She observed that the firm’s slot technicians and attendants found Konami’s machines “easy to maintain and well thought-out” and appreciated their reliability.