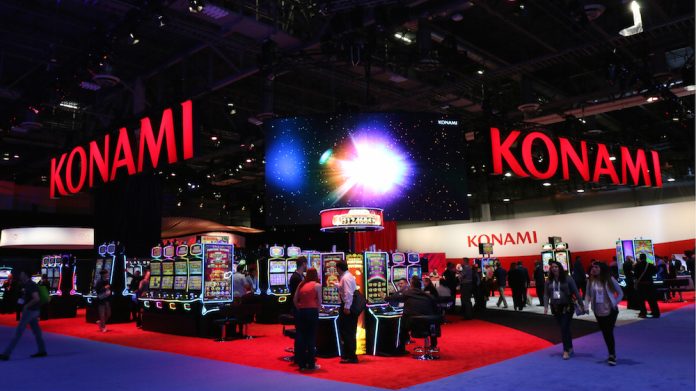 In Las Vegas on October 9 – 11, more than 26,000 casino representatives from markets around the world had the opportunity to experience a variety of games and systems technology aimed at meaningful player value and enduring entertainment.

With a standard cabinet width, four-times the pixel depth of standard HD, and leading library of 4K-resolution game themes, Konami’s new KX 43 is designed as a trim-fit champion for any area of the floor. Its 43-inch, edge-lit portrait screen carries custom-programmed graphic interaction with the LCD button panel, which is inlaid a relaxed slant top. KX 43 includes the core comforts and conveniences for today’s players, including USB charging port, double cup holders, and a classic bash button.

During G2E 2018, KX 43 showcased a competitive lineup of exclusive launch titles covering everything from symbol-driven linked progressives to original jackpot bonuses. A variety of titles were on display, all developed in 4K Ultra HD for graphics that catch attention and celebrate wins with stunning excitement.

Fortune Totems is a compatible complement to Abundant Fortunes in the Ba Fang Jin Bao linked progressive series. During the free games, players select which picture symbol they wish to become gold for the duration of the feature. This selected gold symbol appears with nudging stacks and higher payouts. In addition, the gold symbol has an incrementing multiplier that increases each time it lands in a winning combination during the free games.

Vegas Rise is one of four debut launch themes in Konami’s new Reels Up linked progressive series. This ULTRA REELS PRIME title features “up arrow” symbols across all 5 reels, which trigger the game’s Reels Up feature. Whenever the arrows land on reels 1 and 2, it causes reel 3 to expand upward for the chance to spin a bonus cash reel filled with instant guaranteed awards. Reel 4 and reel 5 also expanded up into independent cash reels when arrows land in each of the preceding reels. All the bonus cash reels contain instant credit prize and jackpot opportunities, including the big supreme. Vegas Rise is multi-denom, integrated linked progressive showcased on KX 43 in 4K Ultra HD.

This year marked the industry debut of Konami’s SynkConnect “cardless” player tracking convenience. This touchless, multi-channel solution empowers casino players with a variety of secure methods to augment or replace a traditional player loyalty card at the EGM, including their personal mobile device, fobs, a room key, and more. It helps open up more opportunities for players to connect and engage with property loyalty programs by combing Near Fi Konami has also developed SynkConnect Mobile as a robust mobile application to give players all the benefits of touchless authentication. SynkConnect helps transform how casino players connect and engage with the casino’s loyalty program using the technology conveniences already interlaced through their daily life and the guest experience. With more new ways for players to connect, SynkConnect helps eliminate barriers caused by dependence on traditional loyalty cards and increase “carded” play activity through a number of convenient methods of authentication.