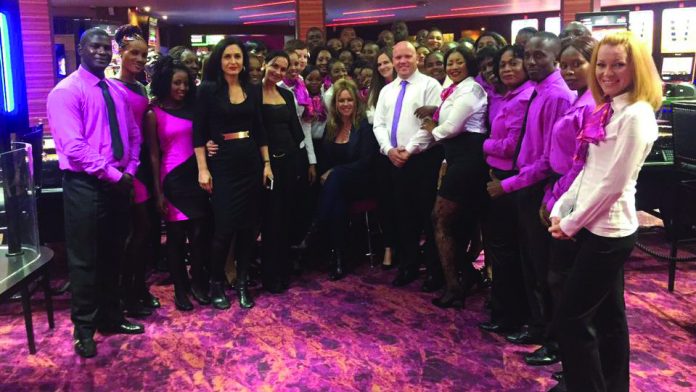 The management of the newly-opened Lagoonda Casino in the West African state of Sierra Leone has heralded the property as the first casino in the region to utilise digital gaming technology.

[dropcap]L[/dropcap]ast month saw the opening of a new casino and entertainment complex in the Sierra Leonean capital of Freetown.

Boasting state-of-the-art digital EGMs and table games, the Lagoonda Casino welcomed both local and international VIPs to a grand-opening event on June 3.

Situated in the coastal district of Aberdeen, the property is located within the confines of an older retail and entertainment space – which was acquired and renovated by Dubai-based African casino operator Games World International.

GWI’s chief executive officer Tani Hanna attended the opening event. “We are here to witness a transformation in the way a casino should look, operates and provides service in this part of the world,” he told the Freetown- based Global Times Newspaper.

“We at Games International have for the last 15 years decided to take a different approach, by bringing radical changes to our African operations.”

Headquartered in Dubai, GWI manages and operates five other casinos throughout Africa: one in Djibouti – and the rest distributed throughout the west African states of Liberia, Cameroon and Equatorial Guinea.

He went on to suggest that the quality of standards at Lagoonda would have inevitable knock-oneffects for GWI’s local competition.

“Poorly managed casinos eventually will have no place in this country – authorities will investigate and probe the background of future applicants for casino or any gaming other related licenses,” he said. “The result will be the protection of social welfare, a decent return to punters and fair competition and success for investors – as well as larger tax revenues for the state.” Meanwhile, the property’s new technology was highlighted by another local publication, Awoko Newspaper, which reported: “Most of the guests from both public and private sectors were impressed and appreciated the opening of the casino – noting that there are other casinos [in the country], but that the presence of digitalised machines make them feel that they stand a greater chance of winning here than losing.”

In addition to GWI executives, the opening party also saw the attendance of Sierra Leone minister for tourism and culture Sidi Tunis – who praised GWI for investing in the new venture despite the region’s recent Ebola epidemic.

“The establishment of a modern casino will not only provide entertainment, but will also provide jobs for Sierra Leoneans,” he remarked. “[This] forms part of the government’s local content policy to encourage more investors to Sierra Leone in order to increase employment.”

SIERRA LEONE AND EBOLA – THE ROCKY ROAD TO RECOVERY

The opening of the Lagoonda Casino serves as a wider indication of international business once again investing in Sierra Leone – after three years of the world’s worst ever outbreak of the deadly Ebola virus disease.

Originating in neighbouring Guinea in December 2013, Sierra Leone’s fragile healthcare system was quickly overwhelmed by a flood of cases throughout its rural areas – and later in the capital city itself. According to statistics from the World Health Organisation, just under 4,000 Sierra Leonean citizens died of the disease – but the actual number of deaths is widely considered to have been hugely underreported.

Meanwhile, in a bid to stem the spread of the virus, military-enforced quarantine measures played their own part in massively curtailing the country’s economic activity and food production. As of April, Sierra Leone has been declared Ebola-free – and employment rates in the country have bounced back relatively swiftly. Still, total work hours are continuing to lag – and two thirds of households struggle to put enough food on the table every week.

Little wonder, then, that the opening of the Lagoonda has been treated to such fanfare in local news outlets. In today’s Seirra Leone, such ventures aren’t mere economic niceties – for some, they may well serve as a means of survival.