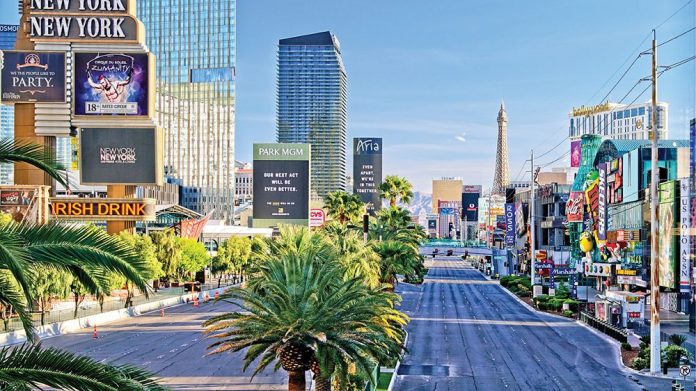 While debate continues over exactly when Nevada’s casino resorts will be able to open their doors once again, in the meantime, a number of major operators including Wynn, Sands, MGM and Caesars are in the process of putting in place new operating procedures and setting out social distancing measures.

Nevada’s governor Steve Sisolak announced that the state would join Washington, Oregon, Colorado and California in the Western States Pact on 27 April.

“Millions of visitors from our fellow Western states travel to Nevada every year as a premier tourism destination, and this partnership will be vital to our immediate recovery and long-term economic comeback,” he said in a statement.

However, while Sisolak has announced criteria for gradually reopening nonessential businesses in the state, he has yet to establish a concrete date for an incremental reopening.

“I know people are anxious. I know people want a date,” he said, speaking on 22 April. “I would like nothing better than to give you a date, but the virus and the science is determining when this date is going to be. I do not want to risk the chance of undoing it by opening a week or two early and then have us have another spike and have to shut everything back down again and start back at square zero.”

Earlier in the month, the mayor of Las Vegas, Carolyn Goodman, called on Sisolak to end the statewide shutdown of casinos and non-essential businesses.

“Being closed is …killing Las Vegas, our industry, our convention and tourism business that we have all worked so hard to build,” she stated, speaking at a city council meeting.

Nevertheless, Goodman – who does not have jurisdiction over the Las Vegas Strip – later drew criticism following a pair of interviews with MSNBC’s Katy Tur and CNN’s Anderson Cooper in which she called for casino resorts to reopen but downplayed her administration’s responsibility for setting out social distancing procedures.“That’s up to them to figure out,” she stated, responding to Cooper’s question of how casino operators could go about implementing social distancing.

“In Las Vegas, we’ve had 11 Culinary Union members die because of COVID-19. The mayor’s statements are outrageous considering essential frontline workers have been dealing with the consequences of this crisis first hand,” said Geoconda Argüello-Kline, secretary treasurer for the Culinary Workers Union.

Despite the ongoing uncertainty, a number of major local operators are discussing updated operating procedures for when they eventually reopen.

On 19 April, Wynn Resorts said it plans to use thermal cameras to check temperatures at entrances, advise guests to stand at least six feet apart, to make changes to its properties’ physical layouts to help social distancing, and to have all employees wear masks.

Speaking during the company’s quarterly earnings call, Las Vegas Sands president and COO Robert Goldstein stated that his firm would look to Hong Kong as an example of best practice ahead of reopening its Las Vegas properties.

“[Hong Kong] is pretty amazing. You can go shopping. You can go eating, and do a lot of things there and life there is not [entirely as] usual, but it’s ongoing,” he affirmed, noting that the city has quickly adapted to using temperature checks, masks, gloves and social distancing. “That’s what we hope we can do in Las Vegas, as well and adapt to the new environment.”

MGM Resorts International similarly announced on 23 April it will introduce a range of measures including “restrictions on the number of seats per table game, slot machine spacing, temperature checks, mask protection as well as other measures at our restaurants and entertainment venues to enforce social distancing measures”.

Caesars Entertainment spokesman Richard Broome said the company “will build on the hygiene, cleaning and distancing protocols which were coming into practice when properties were ordered” in March.

Those protocols include increased availability of hand sanitiser, ensuring that slot machines are cleaned every three hours, along with social distancing steps such as turning off every other slot machine, removing every other table games position, separating restaurant tables by six feet, and reducing bar capacity by half.

Treasure Island spokeswoman Jennifer Renzelman reported that the company is drafting an internal health and safety plan for guests and employees, and is working with vendors “to procure appropriate safety and sanitation measures”.