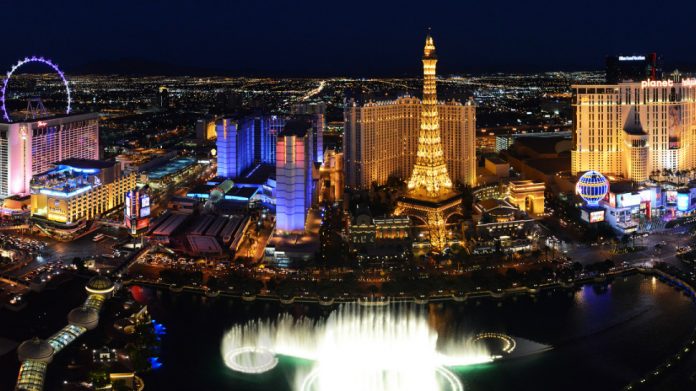 The global gaming industry heads to G2E this year as Las Vegas is positioned to break its 2015 visitation record.

[dropcap]J[/dropcap]uly 2016 was the best month on record for Las Vegas visitation, after the destination welcomed more than 3.8 million visitors.

The latest statistics from the Las Vegas Convention and Visitors Authority (LVCVA) reinforce the continued strength in Las Vegas as a key tourist destination. The city is currently positioned to break its 2015 record of 42.3 million visitors.

Convention attendance experienced a 16.5 per cent increase over 2015, as the city welcomed more than 351,000 business visitors throughout July, while 4.1 million passengers travelled through McCarron International Airport.

This increase in visitor numbers translated to improved gaming revenues for Las Vegas. With operators benefiting from five full weekends in July – including the three-day Independence Day holiday weekend – casinos state-wide generated monthly revenues of $1bn (E894m), up 10.2 per cent on the prior-year period and the first 10-figure month since May 2015.

“We had anticipated a strong July on the Strip based on positive commentary from a number of casino operators coupled with the extra weekend compared with the prior year period,” said John DeCree, an analyst at Union Gaming Securities. “However, above-normal table hold also provided a boost to the Strip results in July.”

Commenting on the city’s continued growth, Rossi Ralenkotter, president and CEO of the LVCVA, said: “We are encouraged by the continued strength and growth of the tourism industry particularly in the meetings and convention sector. As a destination, we look forward to building on this momentum in the coming years. We need to ensure that we continue to provide the world-class experience and facilities our visitors have come to expect.”