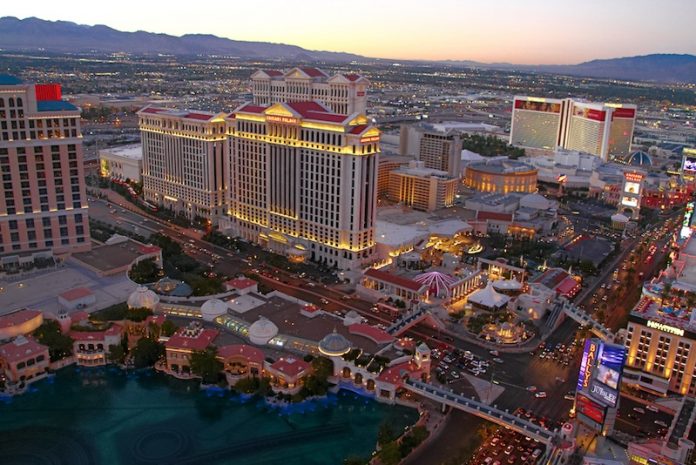 Las Vegas has been focus of international media following a fatal shooting and a jewellery heist which both occurred separately on Saturday night.

The Las Vegas Boulevard was partially closed for a number of hours on Saturday morning following two high profile but unrelated crimes, a shooting on a bus which left one man dead and a separate burglary at the Bellagio.

Las Vegas saw widespread disruption within the city throughout the day as well as being the focus of global media and trending on social media throughout the weekend.

According to The Las Vegas Journal, the shooting occurred around 10:50am on a double-decker bus outside The Cosmopolitan and reports suggest a man began shooting “indiscriminately” on the top deck of the bus.

The shooting, which the police department have described as an “isolated incident”, left one person dead and another with a gunshot wound to the stomach being treated at University Medical Centre.

Following hours of stand-off with police and the shutting down of portions of the strip, a male suspect was taken into custody by the Metropolitan Police Department.

Commenting on the shooter, Assistant Sheriff Tom Roberts, explained, “he didn’t seem to have a motive,” and claimed the man appeared to have “mental issues” and was “definitely was not really with it.”

In a separate incident during the early hours of Saturday morning, a group dressed in tuxedos and animal masks committed burglary at Tesorini, a high-end jewelry and watch retailer, in the Bellagio Casino.

Reports suggest the group smashed the stores windows and grabbed a number of items before bolting.

Police are questioning a number of people but nobody has been identified at this time.

The proximity of the events on Saturday led many to express confusion on social media but police have continuously stressed the crimes were unrelated.