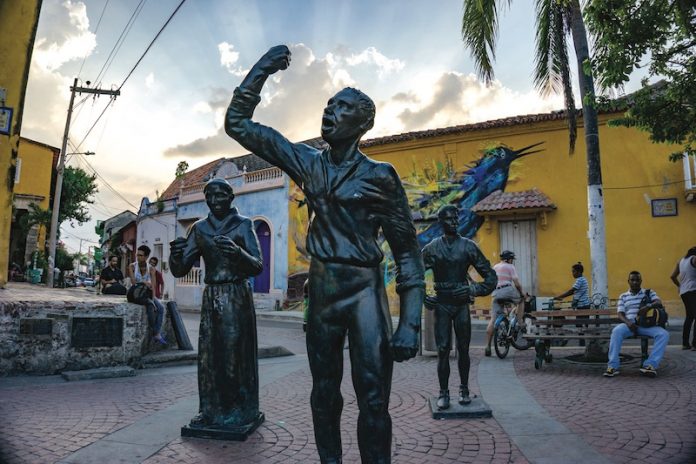 Minnesota economist Paul Westerburg once wrote, “if being wrong’s a crime I’m serving forever”. With Colombia’s banks under increasing pressure from international financial regulators, the country’s operators could face a tough task getting nervous bankers to re-evaluate their negative view of the industry. Edward Lowton asks who in this case is actually guilty of the crime of being wrong, and who is going to end up serving forever?

For the people of the Cartagena neighbourhood of Getsemaní, Pedro Romero occupies a near mythical status. Representing the city’s artisan class, Romero played a key role in organising them into a militia and an influential force in the movement towards independence in the Hispanic Caribbean in the 18th and 19th century.

An emblematic figure then for Colombia’s trade associations who are currently engaged in a struggle with the country’s financial sector, over the latter’s persistent refusal to allow national operators access to a range of financial services.

While the country’s banking and securities regulator, the Superintendencia Financiera de Colombia, issued guidance on the issue three years ago in 2014’s Basic Legal Circular 029, which clarified that licensed operators should be allowed access to banking services, the banking sector is still dragging its heels.

Trade association Fecoljuegos has made it a goal for this year to get the country’s financial entities to recognise that regulated gambling is a legitimate business, with the revenues it generates ringfenced for the national health service, “contributing to a million Colombian dreams” as the regulator Coljuegos enthusiastically suggests on its website.

Last year, many operators faced the denial or suspension of financial services, with some banks going so far as to withdraw ATMs from casinos.

While in some instances operators were given a vague explanation that they “were not a target customer” or that the bank was not interested in opening accounts for gambling companies, in the majority of cases they simply refused point blank.

The situation has escalated to the point where employees of casinos and gambling parlours are being denied housing loans while operators have had their tax payments to the government blocked.

Responding to this situation, the trade body Fecoljuegos has undertaken a significant educational campaign, going on the offensive and lobbying the banks, working closely with the regulator.

This problem is not limited to Colombia, operators in the nation’s north-western neighbour Nicaragua have also run into problems with the banks. Last year, trade association Ceija ran its first International Forum for the Prevention of Money Laundering in Nicaragua as part of a concerted campaign to improve gaming’s image in the Central American nation.

Since late 2015, Ceija has been involved in a standoff with Nicaragua’s private banks which – as in Colombia – have classified the gaming industry as “high risk and vulnerable to organised crime”.

While not helpful to the industry, the banks’ tepid response to the issue is understandable in the broader context. Global banks are facing increased pressure from US regulators to clamp down on money-laundering with pressure from the government to police not only their own transactions but customers’ as well.

In a report released this March, the US State Department has blacklisted nearly all Latin American countries for money laundering in 2017, with only Chile escaping. To paraphrase Graham Greene, from an American point of view apparently the entire continent “looks like it is helping the police with their enquiries”.

The report notes that Colombia’s regulator Coljuegos, “continues to make limited gains by adding analytic capacity” but also observes that the agency still suffers from “a lack of resources …and a lack of information sharing agreements with other regulatory and intelligence agencies.”

Given this, alongside a visit by the IMF in March, and the recent high profile arrests of several Coljuegos executives, Colombia’s operators could face an uphill battle to persuade the banks to stop tarring the regulated sector with the same brush as the illegal industry.