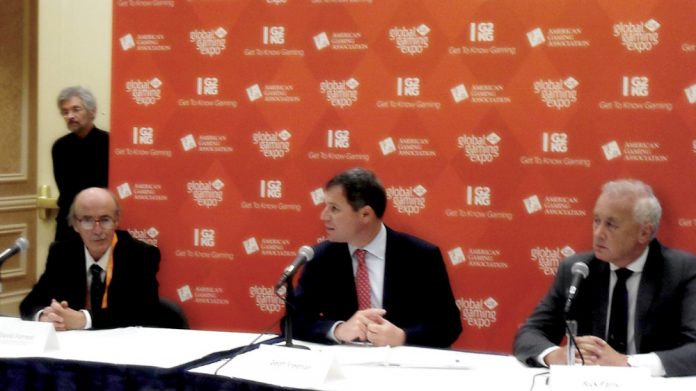 Speaking at this September’s G2E, AGA president and CEO Geoff Freeman highlighted the changing narrative surrounding the US gaming industry, and how the repeal of PASPA could open up new frontiers for the sector.

[dropcap]“[/dropcap]First and foremost 2016 has been a pretty consequential year for the gaming industry when it comes to our positioning and the mainstream nature of the sector.

“Ten years ago we could only imagine the unlikelihood that they would hold a presidential debate in Las Vegas and it gives a sense from a political and policy perspective of  the mainstream nature of the gaming industry today.

Later this year, eight miles from the US capital, MGM will open up their $1.3bn (E1.2bn) MGM National Harbor, another opportunity to put this industry front and centre with policy makers, Indian leaders, the media and others.

I think it’s quite notable for the gaming industry to have this increasing presence among opinion leaders and the most consequential in the country.

As we get up to election day we will see the conclusion of the gaming process which the AGA launched more than 12 months ago, where we talked about going into the battleground states – where our industry is under-represented – and sharing that story of what gaming is all about.

We’ve done that coast to coast, from Colorado to Iowa to Missouri, to Ohio, in just about every battleground state you can think of and our industry is driving $75bn (E67.5bn) of economic activity in those states alone.

Our commitment’s never been greater: we have been telling the story of gaming, we’ve been helping folks at a local level, showcasing what this industry does, the contributions we make to local communities, our partnerships with non-profit and philanthropic organisations.

It’s also been an important opportunity for us to educate our own industry on the issues of importance to gaming.

A lot of  people over the years have defined gaming issues pretty narrowly around taxation and other things dealing with the regulatory environment but as a mainstream industry that is present in 40 states at this point, we care about the big issues, we care about immigration, we care about infrastructure, we care about healthcare and energy policy.

2016 is going to be a launching pad for the mainstream industry to come into some great opportunities in the years ahead.

If you spend any time with me you know that, when it come to telling the story of the casino industry, I don’t see any divide between tribal gaming and commercial gaming, since our customers certainly don’t make this delineation, it’s casino gaming to them, and that’s the story we’re trying to tell.

But a big question I’m asking is how do we take that $240bn and grow that to $260bn, $280bn or $300bn? Where are the opportunities for growth given that there is limited opportunity for geographical expansion left in the US?

Yes there’s Georgia, we’ve all heard about that and there’s the great hope called Texas still gives us something to discuss but geographic expansion is going to be limited and when it comes to growth for this industry we’re going to have to get more creative.

One way to do that is by empowering the industry to provide our customers with the products that they want and there is no better example of that than sports betting.

Americans are clamouring to be able to bet on sports legal way, we know that because they are going to reasonable lengths to do that in an illegal way. A conservative estimate right now is that $50bn a year is wagered on sports here in the US.

When the Professional and Amateur Sports Protection Act (PASPA) was passed in 1992, it was done under the auspices of protecting the integrity of sport, but I think we’ve learned over the past 25 years that what it has done is put us in the darkness, it’s given us less access to data, it gives us less information about what’s really going on.

That’s going to be a huge message we will be delivering both this year and next year, we will succeed in getting PASPA repealed and improving integrity will be a core part of that.

I think what you are seeing is the tide quickly turning and  have never been more confident about the prospect of empowering states to have a law for sports betting, if they so choose.”