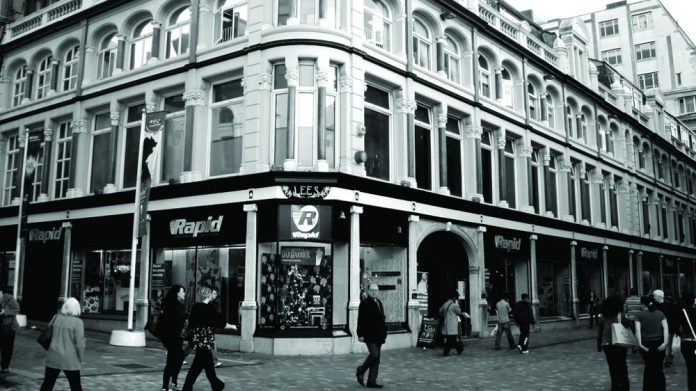 Liverpool City Council has approved a plan by a property developer, Niboco, that would convert the former George Henry Lee department store building into a new leisure development, offering a hotel, nightclub, bar and casino.

Niboco plans would see the nine-story building converted into a 157-room hotel – dubbed “The Williamson” in planning documents – which would include a restaurant, bar, conference facilities, gym, and spa, while the casino and nightclub would be situated in its two basement floors.

Located in the city centre, the building housed George Henry Lee and its successor John Lewis until 2008, when the department store moved to its current premises in Liverpool One shopping, residential and leisure complex.

Liverpool-based Rapid Discount Outlet then moved in to the building in 2013, however the store’s parent company, Rapid Group Holdings, later went into administration and since then the building has only been partially occupied.

The Doherty family, which operates Rapid Group Holdings, along with property investor Williamson Holding will also be involved in the development.

“When we purchased this iconic building and moved the Rapid retail business, being a local, Liverpool family, we were well aware of its heritage and as such we didn’t want to see such a beautiful and historic building left empty and fall into decay following the departure of John Lewis to Liverpool ONE,” said Martin Doherty, a director at Rapid Group Holdings. “The building has a very special place in the memories and affections of Liverpool people and we have been working hard to ensure its future for many years to come.”

Nick O’Prey, a spokesperson for Williamson Holding, added: “We are delighted to be partnering with the Dohertys to help them realise an exciting vision for this stunning building.

“They deserve an enormous amount of credit for their determination to preserve this important piece of Liverpool heritage. Jointly, we intend to deliver a development of exceptional quality and originality.”