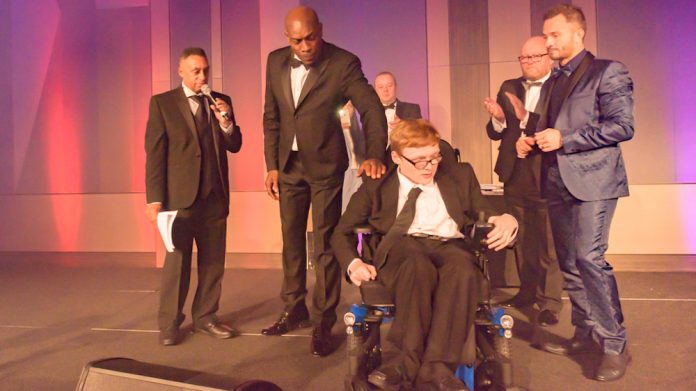 A 19-year-old boy, who has Cerebral Palsy, has been presented with a brand-new powered wheelchair by boxing legend Frank Bruno, courtesy of CHIPS Charity and Genting UK at Resorts World Birmingham.

Ashley Healey, who lives in Crewe with his mum, dad and step-brother, has Quadriplegic Cerebral Palsy which means he is reliant on a wheelchair. Ashley has just started college and his old wheelchair was heavy and difficult to use. As a result, he used to tire easily, which affected his education and limited his social life.

His new powered wheelchair will provide him with a greater amount of independence, meaning Ashley can now enjoy his time at college with his peers. The chair also has better seat support, which will improve his posture and provide him with greater comfort.

The powered wheelchair was purchased with funds raised by employees at Genting UK who ran the Rock n Rock San Diego Half Marathon in June 2018. £50,000 was raised in total by five runners from Genting Casino UK and the money was donated to CHIPS – a charity founded on behalf of the Casino and Gaming Industry, to raise money and present young people with disabilities specialised wheelchairs.

Frank Bruno, said: “I was so happy to be asked to present a wheelchair to a deserving young boy on behalf of CHIPS and Genting Casino UK for the second time in as many months.

“Everyone deserves to enjoy their own independence when they’re young and I’m delighted that Ashley will now find it easier to spend time with his friends at college.”

Ashley’s father, Heath Healey, said: “It’s been a really exciting evening and at times it was even overwhelming. I can’t thank Genting Casino UK and CHIPS enough for providing Ashley with this powered wheelchair.

“It is truly amazing that there are people doing this for children like Ashley. It’s people like them that make a difference in the world and if it wasn’t for them, he would never have received a powered wheelchair like this.”

“Education is hugely important so it’s fantastic that Ashley will now be able to get around college a lot easier than he did in the past.”

Linda Lindsay, CHIPS Charity co-founder said, “It was great to have Frank Bruno present a wheelchair to Ashley, he really will benefit from having a powered wheelchair.”

“I want to thank the staff members at Genting UK who participated in the Rock and Roll Madrid Marathon and Half Marathon for once again raising enough money to transform a young person’s life.”