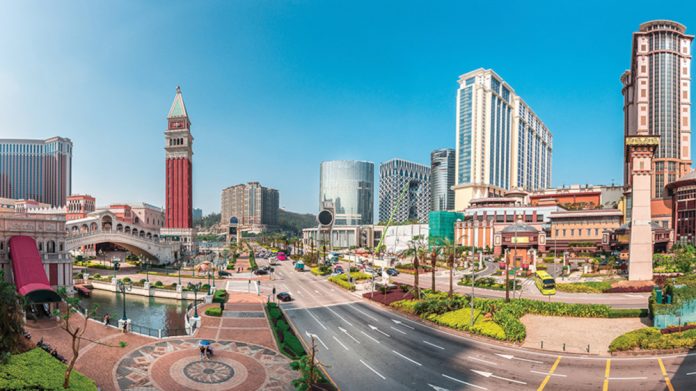 Part of Sands’ ongoing investment in Asia, The Londoner Macao, a $2bn redevelopment of Sands Cotai Central, is on track to launch in February. Meanwhile, over in the US, Sands is is looking at selling its Las Vegas assets.

Speaking in late November, Wong confirmed that most of the construction on the $2bn transformation of Sands Cotai Central (SCC) into the British-themed Londoner Macao are now complete, with only work on the exterior wall and entrance still outstanding.

“The Londoner Macao is planned to open in early February in next year,” he said. “The retail and dining areas will be opened at the same time.”

Wong also highlighted the non-gaming elements included in the redevelopment. “In the re-construction and transformation of Londoner Macao, we added a concert hall and various dining venues, and have always headed in the direction of diversification and non-gaming elements,” he stated.

In a subsequent press release on 16 December, Sands said it will hold an official opening ceremony in February, with the remainder of the property to open progressively throughout the year.

The exterior of The Londoner Macao will see the property’s main façade recreate the architecture of the Houses of Parliament, including a replica of Big Ben.

The resort features a new 6,000-seat arena, rebranded retail mall and street shows. On the food and beverage side, the property includes a new Dongbei and Sichuan cuisine restaurant, a Thai restaurant, a British styled restaurant named Churchill’s Table and a gastropub by celebrity chef Gordon Ramsay.

The Londoner will also expand on SCC’s current MICE capabilities, while Sands has announced plans to bring West End shows to its theatre.

“We had the SCC for years. It was not a great product. It didn’t deliver,” said Rob Goldstein, Las Vegas Sands’ president and COO, speaking during the company’s Q3 earning call. “We’ve redone this product with 6,000 rooms and suites; a casino – if you can see it, the images are spectacular – a redone retail environment [in] the epicentre of the Cotai Strip across from the powerhouse which is The Venetian. I don’t think we couldn’t be more excited to see it get fully open and operational.”

Sands China’s parent company Las Vegas Sands reported an 82 percent year on year drop in net revenue in Q3. Net revenue was $586m, compared with $3.3bn in the third quarter of 2019. Net loss was $731m, down from $669m in net income for the same period last year.

Following the difficult quarter, Sands confirmed that it is exploring selling its Las Vegas resorts in a move that would see the company exit the US to focus on its assets in Asia. The firm is said to be looking to raise $6bn with the sale of the Venetian and Palazzo resorts, together with the Sands Expo Convention Center.

“Buying Venetian and Palazzo, that’s not just buying a property on the Strip, that’s buying a convention business,” Beynon said. “The buyers that were looking at Caesars, they’re probably the same ones that would at least look at this. Tilman Fertitta was interested in Caesars, so I certainly think he’d be interested. On paper, it seems like that could work.”

Sands’ operations in Macao and Singapore both generated more revenue in Q3 than its Las Vegas assets. Its Macau properties reported combined revenue of $167m and its Singapore integrated resort contributed $281m, while its Las Vegas properties brought in $152m, according to filings with the US Securities and Exchange Commission.

Unsurprisingly Sands was more upbeat on its prospects in Asia, with the company’s executives highlighting its ongoing investments in the region.

“Our balance sheet strength enables us to continue to execute our capital investment programs in both Macau and Singapore, which we believe will position the company to deliver industry leading growth and profitability in the years ahead,” said Sands chairman and CEO Sheldon Adelson.

In Macau, The Grand Suites at Four Seasons, the largest all-suite Four Seasons hotel in the world, launched in October. The new tower adds 289 accommodation units to Sands’ existing Four Seasons branded property on the Cotai Strip, bringing it up to a combined room count of 649.