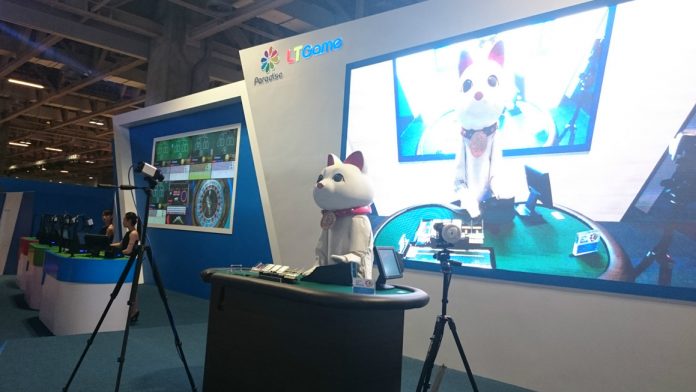 LT Game showcased a large array of innovations on its home turf at MGS, with the company’s heavy R&D investment creating two new slot machines, a virtual horse racing game and the LMG-6 Terminal, the latter of which is currently taking on the US market.

[dropcap]M[/dropcap]acau based LT Game, a subsidiary of Paradise Entertainment, exhibited from the largest stand at the MGS Entertainment Show this year, a presence clearly indicative of its  status and importance in the largest gaming market in the world.

Out to impress on its home turf, it was no surprise that LT Game brought a plethora of new products to the show, the centrepiece being the company’s iconic robot dealer, this time in the form of a cat.

Betty Zhao, COO at LT Game, was understandably upbeat about the development and impact that her company is making in the marketplace. “Our products are already very popular here in Macau and we had lots of installations in 2016,” she explained. “Also we have lots of new products this year. We have two different types of slot machines and we also have a virtual horse racing game as well as new products for our cash handling side.”

The two new slots, LT Game slot and Fa-Fa slot, are new products developed from the company’s HK$50m R and D budget last year. The former has a more traditional leaning, while Fa-Fa brings something new to the casino floor.

Zhao added: “The Fa-Fa slot is very unique. In the industry now, everybody is focussing more on 3D effects, so for the Fa-Fa machine we use mechanical 3D effects so it looks very different from traditional slots. Everyone else is using computer technology but we combine sound and mechanical effects together for this product so it’s really different. The LT Game slot only has one monitor but for Fa-Fa we have one traditional LED screen and one smaller LED with mechanisms to make it more interactive for the players.”

We have a collaboration with IGT for our LMG product and they are acting as an agent for us everywhere but Macau.

Feedback has been good according to Zhao, despite the fact that these slots are still undergoing approval. Another of the company’s products has entered the market however, with LT Game partnering with IGT to distribute live multi player terminals across North America.

Zhao praised the partnership: “We have a collaboration with IGT for our LMG product and they are acting as an agent for us everywhere but Macau. IGT has already helped us deploy over 100 machines recently and we secured big installations in Pennsylvania Sands casino so there are 150 machines there. Macau now has 38 casino locations and by 2020 we can see a few more, but at the end of the day when we are looking at the market scale, the US is the number one and also the biggest for us in the future.”

While the company has over 4600 machines in Macau, Zhao is unswayingly cognisant that the largest opportunity for future growth is in the US. Relationships with Sands, MGM, Wynn and other casinos in Macau will help LT Game achieve this, however the company is relying on the strength of its products to lead the way. With over 100 R&D engineers set to task, LT Game is aiming to be a leading innovator within the gaming industry, and even beyond that, with sister company LT Sports investing in VR technology that Zhao said may one day cross back over onto the casino floor.