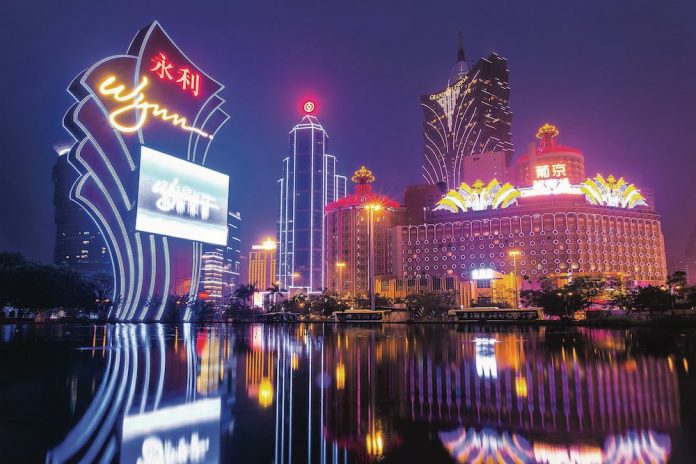 Revenues in Macau jumped almost 24 percent in May, beating expectations and posting a 10-month winning streak as wealthy gamblers returned to the southern Chinese territory. Gross gaming receipts in May rose by 23.7 percent to MOP22.7bn ($2.8bn), according to data released by Macau’s Gaming Inspection and Coordination Bureau (DICJ).

The growth rate was the fastest since February 2014 and the second-highest monthly result this year, while Macau’s gaming industry has now seen revenue climb for 10 months in a row. After a two-year decline amid a crackdown on corruption by the Chinese government, high rollers who stayed away are now also returning, with Macau’s revenues currently more than six times those of Singapore and nine times those of the Philippines.

“Luxury spending across China is up and that’s a good proxy for the high-end of the Macau market,” said Union Gaming Group analyst Grant Govertsen. “At this point, we think the mass market continues to grow at least in the mid-teens, while the VIP growth rate is improving notably.”

Hotel occupancy rates and retail performance in Macau are also improving, according to data compiled by Bloomberg, visitors to Macau in April increased by 11 percent to 2.74 million, while the territory’s occupancy rate of 86 percent is the highest this year. Despite this, there remain reasons to to be cautious about the territory’s renewed momentum.

“The first five months have been way above everybody’s expectation,” said Melco CEO, Lawrence Ho, speaking in May. “People are travelling more, spending more, they are buying Louis Vuitton bags again. I think people are starting to feel comfortable again, after the anti-extravagance and anti-corruption campaign.”

Ho revised his earlier estimates for a high-single digit gain issued during his initial call at the beginning of the year, suggesting that full-year Macau gaming revenue growth could be in the low- to mid-double digits.

Speaking during the company’s first quarter earnings call in April, Wynn Resort’s CEO Steve Wynn, expressed similar sentiments, suggesting that now the initial impact of the crackdown had subsided the VIP market would begin to regain its equilibrium.

“The suppression of the VIP market was something that was the result organically of a process that the administration of president Xi Jinping thought was appropriate for the country, the elimination of corruption,” Wynn explained. “It had secondary effects on high-end products like shopping, and automobiles, and gaming was part of that.

“Although corruption is still a major item in the PRC, the initial impact has softened, because so much of the work that they thought had to be done, was done.”

Wynn suggested that Chinese visitors to Macau will now begin returning to their normal spending habits, and presently “are not so strongly influenced by public policy issues”.

“So the people are settling back into routines that they’re comfortable with, and that includes going to Macau and buying a new car or shopping at Louis Vuitton,” he added.

Wynn Resorts continues to be a share-taker in the VIP market, gaining traction with the ramp up of Wynn Palace while performance at its Peninsula based Wynn Macau holds firm. IGamiX managing partner Ben Lee suggested Steve Wynn’s Cotai debut with Wynn Palace last August has been the key catalyst in the VIP recovery, along with increased liquidity for junkets, speaking to Macau broadcaster Teledifusão de Macau.

While a renewed VIP segment appears to be making its presence felt, analysts at Bernstein contend that mass will continue to be the driver for sustainable growth in 2017 and the rest of the decade in a recent research note, citing improvements in transport infrastructure along with the continued opening and ramp up of new casino resorts in the territory.

Despite these positive outlooks, there are still ongoing concerns sur rounding the government’s policy to increase regulation of the $28bn industry. More recent efforts to control capital flight imposed by Macau authorities in May include facial recognition and identification card checks at ATM machines before cash can be withdrawn by mainland users of China UnionPay Co. cards, a stepped-up measure to curb money laundering and stem outflows.

Meanwhile, in the same month, Chinese police cracked down on an underground banking channel to curb outflows, according to reports in the local media.

“Normally it would be big news and people would be scared away from Macau,” Ho said of the new measures. “But because of the underlying demand, people adapt.”

Concessions granted by the Macau government will start to expire in 2020 and Ho said he hoped authorities would give an indication in the next year of what to expect. Despite this, Ho emphasised that he remained confident of the company’s ability to rebid or reapply for the licences.