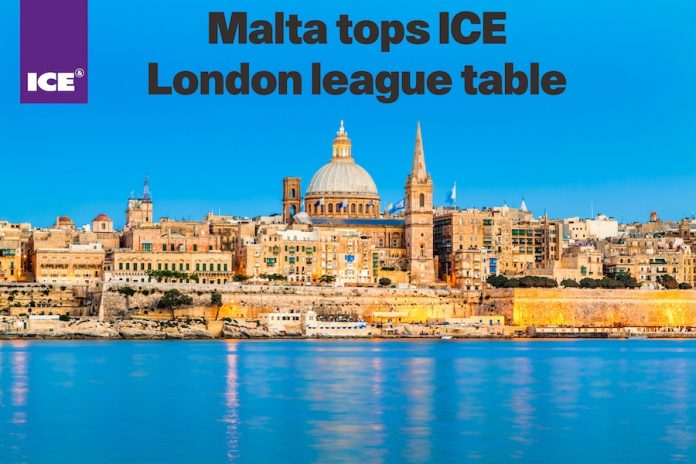 The importance of Malta as a gaming jurisdiction has been put into sharp relief with confirmation that the Mediterranean island, which has a population of less than 450,000, will be represented by no fewer than 38 exhibitors when the doors open on ICE London, the world’s most international gaming technology event (6 – 8 February, ExCeL London, UK).

Malta is followed by the United States, which is being represented by 30 exhibitors, Italy (22), Germany (13) with Slovenia and Taiwan (both 12) completing the top five, excluding host nation the United Kingdom. A total of 62 nation states and jurisdictions will be represented by exhibitors on the show floor, a fact which underlines the unique international credentials of ICE London. Kate Chambers, Managing Director of Clarion Gaming, believes the global nature of ICE London is the key, stand-out reason which explains why gaming professionals from 151 nations attended in 2017 and why the industry views ICE in such high regard. She explained: “The formula for creating successful exhibitions such as ICE London is, on the surface, quite straightforward. A truly international line-up of quality, innovating companies will always attract an international community of gaming professionals. The skill lies in getting the chemistry right, nurturing it, adding ingredients when necessary and working with the market in order to sustain it. Ultimately, what we have with ICE London is the very best gaming innovators from every corner of the globe. This means that we can say with conviction that, if it’s new across any gaming vertical, visitors will find it at ICE London and that’s a hugely powerful reason to be part of what many business people view as being the most important week of the business year.”

ICE London is the world’s most international business-to-business gaming event, with 151 countries represented by the record 30,213 visitors who attended the 2017 edition. Featuring world-leading innovators drawn from across the gaming landscape, ICE London provides visitors with the most comprehensive shop window on the international industry. To register for the 2018 edition of ICE London, which will comprise 500+ exhibitors occupying a record 43,500sqm of net space, visit: icetotallygaming.com