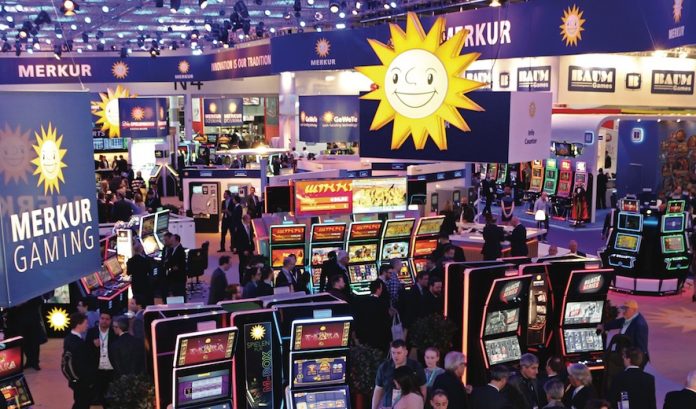 The casino gaming systems manufacturer began its celebration of the 60th anniversary year of the Gauselmann Group with a “hugely successful” presence at ICE 2017.

The Merkur Sun shone brightly in London as Merkur Gaming saw another ‘exceptional show’ with ICE 2017 getting the Gauselmann Group’s 60th anniversary year off on the right foot.

“At G2E in Las Vegas, our innovations and the passion for which Merkur Gaming stands met with an enthusiastic response from customers and players alike and we now intend to continue that winning formula here at ICE,” said Merkur’s International CEO, Athanasios “Sakis” lsaakidis, speaking at the opening of the show.

“We will show our friends and partners what we have in store for them in 2017 and offer them a first glimpse of the future ‘made by Merkur’.

“With our wide-ranging portfolio of games and cabinets, we meet the requirements of international as well as national markets and simply do what we do best: gaming entertainment.”

This year saw the Gauselmann Group present its largest ever stand in London, dominating the ExCel’s south halls, and bringing together all of the exhibiting Group companies, including Merkur Gaming’s national and International teams, edict, Cashpoint and XTiP, GeWeTe, Blueprint Games and Merkur Dosniha from Spain, under the Merkur Sun emblem.

“We have interconnected the booths so that all of the previously separated group companies are now together in one space,” explained Mareike Rein, the group’s PR consultant.

Leading the Merkur Gaming’s product line-up were Avantgarde and Avantgarde Trio premium multigamers and the modern Merkurstar upright cabinet. Alongside these was the Evostar, which is now entering its rollout phase following its Las Vegas preview.

Combining the ergonomic aspects and comfort of a slant top with the configuration of an upright cabinet, the Evostar also features an integrated USB port that both provides additional comfort and added functionality for players.

For 2017, Merkur Gaming is playing with colour, the new Black Series, with its matt black and red highlight design, is already shaping up to be one of the standouts of the year, with a modern, contrastrich motif which takes the Merkurstar and the Avantgarde Trio to a new gaming level.

Meanwhile this year saw the company premier additional games for M-Box Buzzer, alongside with versions of the MBox for the German and Dutch casino markets.

For this year’s ICE, Merkur Gaming took the opportunity to highlight its latests developments in jackpot systems, with the company’s jackpot segment displaying Bingo, Golden Dragon and Egyptian Treasures features.

Aside from the games suite launches eight more single games plus black-andwhite game Win City, exclusively for the Black Series, made their debut at ICE.