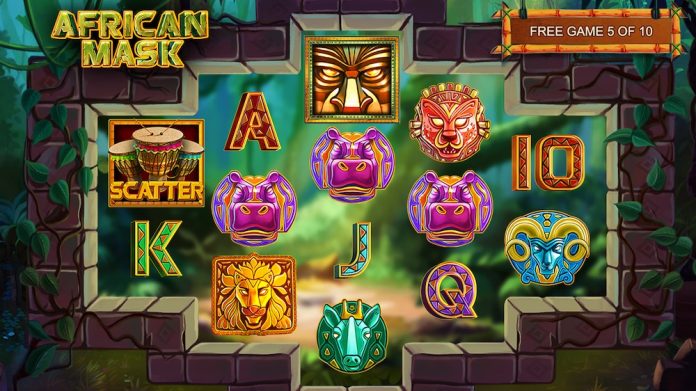 From the cloudless savannahs of Africa to a radiant desert island, Merkur Gaming is bringing the warmth of summer into play this Autumn with three sun-drenched new games which form part of the brand’s ongoing reel game line-up expansion going forward into 2020.

Following an impressive start to this year with its stellar showcase at ICE London, Merkur Gaming’s online portfolio has grown from strength to strength thanks to the company’s continued drive to deliver the best aspects of the land-based experience to the online world. Implementing its ten years experience in translating world-leading game types into the digital sector, the latest additions to Merkur’s interactive roster shine a light on the brand’s gameplan for the next 12 months.

“Our newest releases, African Mask, Dreaming Island and Tribe Of The Sun, all deliver on our usual strong passion for details of classic casino games with an online twist and will for sure match players’ expectations as they combine unique mathematics and in-game features in fun and exciting ways,” explained Maja Cvetkovic, Business Development Manager – Online at Merkur Gaming.

African Mask is a 5-reel, all-pays game with a 2-3-4-3-2 row which delivers a visually impressive player experience combining the majesty of Africa with some of its more dangerous creatures. “We wanted a game which takes players to the wilderness, the pure nature and the beauty of Africa. After fighting wild animals and finding the right way through the jungle, the legendary African Mask releases its mysterious powers,” they added.

The Africa-inspired title features innovative wilds, savannah scatter symbols and the possibility 15 free games when three symbols are played at the precise moment during one of the game’s rituals.

Commenting on the powerful graphics adopted in the creation of African Mask, Cvetkovic, said: “The king of the mask is also the king of the jungle. The African Mask opens up a world full of yellow lions, orange leopards, blue kudus, green antelopes and purple hippos. The neon coloring with its sparkling and shining effects is combined with the bright light of the African sun. Take the chance to go on a safari and study the magic of the African tribes!”

The second new release from Merkur Gaming a subsidiary of German gaming powerhouse Gauselmann Group, delivers a different but even more luminous atmosphere, taking players to the lush haven of Dreaming Island. Offering tropical treasures, precious gold coins and ancient objects, this 5-reel adventure game delivers all the stunning scenery of a secluded atoll with the excitement of being stranded on a lonely island at the end of the world.

“Dreaming Island offers 720 ways to win, in addition to the thrill of having a wild joker and multiple scatter symbols,” she said. “For players it is important to pay attention to the silver goblin, as it is scatter and pays on any position on screen. But there is also the tropical bird as another scatter symbol. While flying around the Dreaming Island the bird triggers eight free games when five birds fly on the reels. During the free games the king of the sky multiplies the number of free games by the number of birds flying on the reels, starting even when only one bird appears. That means all the island’s secrets can be revealed and the player is awarded with up to incredible 96 free games! Dreaming Island is a dream you will not forget!”

Finally, Merkur’s Tribe of the Sun brings the craft of engaging storytelling, which is so popular with land-based reels, in line with the wider gameplay opportunities inherent in the online sector. The title weaves the tale of a medicine man from the Tribe of the Sun prophesising how the tribe will ascend to a glorious future around state-of-the-art mathematics and unique in-game features.

“In Tribe of the Sun five reels meet 30 fixed pay lines to make the first part of the prediction come true,” they said. “Each win is accompanied by a loud drum roll with which the tribe shows its appreciation to the player. The flames of the ritual fire also shows the tribe’s spiritual animals to the medicine man: The wild horse, the wailing wolf, the majestic eagle and the strong buffalo. Those provide their energy to help the tribe rise as well. The medicine man himself is wild and functions as the connecting link between the dimensions by replacing every symbol except the great chief.”

Cvetkovic concluded: “Tribe Of The Sun’s in-game features set it apart from standard reels and bonuses by interspersing everything around the wider narrative. Whether it’s incorporating the tribe’s Flame Lines to give multiple ‘Burning Wins’ or using the Chief’s quest to perform a ritual fire dance as the scatter symbol which can unlock up to 30 free games or trigger a random multiplier of x5, x7 or x10.”