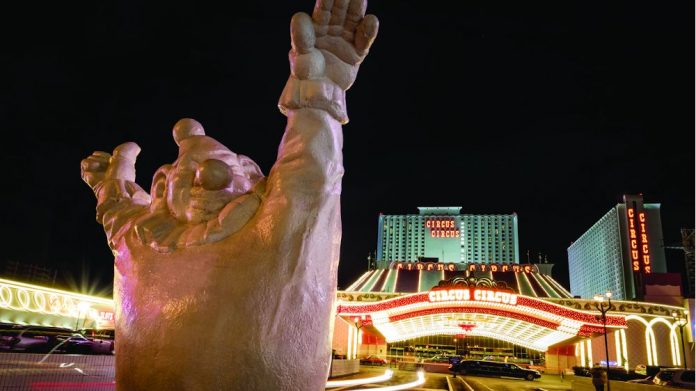 MGM Resorts International has wrapped up the sale of the Circus Circus Las Vegas to Phil Ruffin, with the entrepreneur revealing a range of new plans for the property including a beach area, a 2,000-seat theatre, and updates to its casino floor.

MGM Resorts International confirmed it has closed the sale of Circus Circus to TI-owner Phil Ruffin for $825m on 20 December. The purchase price is comprised of $662.5m in cash and a $162.5m note due 2024, the firm said in a statement.

A day prior to the announcement, the 84-year-old billionaire had received licensing approval from the Nevada Gaming Commission. “The property’s tired and kind of needs a new look,” said commission chairman Tony Alamo.

“I’m very excited that you’re going to bring it back to where it was and beyond.” Ruffin told Nevada regulators on 19 December he plans to renovate and expand the ageing property, adding a swimming pool complex with a wave machine, sand beaches and lazy river water ride.

The new beach area will replace the resort’s 10-acre RV park, the only one of its kind on the Strip. He also plans a $11m 2,000-seat theatre at Circus Circus and is reportedly working to bring The Illusionists, a Cirque du Soleil show playing in New York to the property.

“I don’t believe a Strip property survives well without a theatre,” he said. “We have a commitment from the president of Cirque du Soleil to put a show in Circus Circus and so we’ve had meetings on that. I firmly believe that a Strip property has to have a permanent show.”

The entrepreneur will also carry out renovations to the property’s gaming floor, similar to his Treasure Island resort, updating the casino with a stadium-style gaming area. Speaking to the NGC, Ruffin confirmed that he plans to rehire nearly all of the Circus Circus’ existing employees.

The resort’s sports book will be run by William Hill US. The commission approved the bookmaking company’s application to manage the Circus Circus sports book during the 19 December meeting.

The 3,767-room property – which also includes the five acre indoor Adventuredome amusement park – was a solid earner for MGM over the years. Between 2015 and 2017, the hotel-casino posted the fastest percentage growth in average daily room rate and cash flow among MGM’s Strip resort properties.

“It’s not glamorous, but a lot of Las Vegas isn’t glamorous,” said David Schwartz, professor and gaming historian of the University of Nevada, Las Vegas. Meanwhile, MGM said in the sale forms part of its “asset-light” strategy, “designed to focus on MGM Resorts’ core business and maximise value for its shareholders.”

The company reported that it intends to use the proceeds from the sale to “further its capital allocation strategy and enhance its strategic and operational flexibility”. The Circus Circus acquisition marks Ruffin’s second purchase from MGM. In December 2008, he bought the Treasure Island Hotel and Casino from the company for $775m.

Alongside this, he also owns the 200,000 sq ft Casino Miami in Florida and around 50 percent of the non-gaming Trump International in Las Vegas.

“The opportunity to own 102 acres on the Las Vegas Strip was very interesting. From a strategic standpoint, Circus Circus is the most recognisable name on the north strip,” Ruffin stated, speaking during an interview in November.

“Treasure Island is the crown jewel in my portfolio and Circus Circus adds another layer of gaming customer to my holdings.”

Situated at the north end of the Strip, the Circus Circus is located near several new projects including Resorts World, the Drew Las Vegas and the Las Vegas Convention Center, which analysts suggest will increase foot traffic in the area. “There’s a lot of upside to the property,” Schwartz affirmed. “I think it’s really poised for revival.”