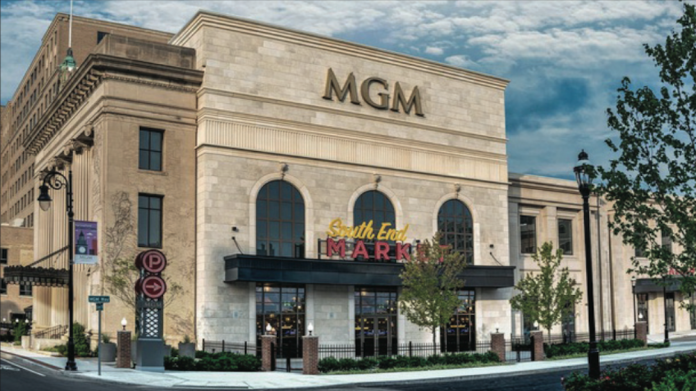 The first Vegas- style casino in Massachusetts has arrived in Springfield, seven years after a tornado devastated much of the city.

It might have been a long road – not a yellow brick one, but one involving a tornado nevertheless – yet last month finally saw the opening of MGM Springfield.

The $960m venture from MGM Resorts represents the first Vegas-style casino in the state of Massachusetts, and the state’s second casino facility of any kind following the 2015 opening of slots-only Plainridge Park Casino.

The town of Springfield was struck by the state’s largest ever recorded tornado in 2011 – an event which killed three residents, injured hundreds more, and caused hundreds of millions of dollars in property damage.

At the casino’s opening ceremony on August 24, Springfield mayor Domenic Sarno heralded the day as emblematic of the city’s recovery, claiming: “from the rubble rises a phoenix.”
Core stats of MGM’s landfall in New England see it touting over 2,500 slots, 120 tables, a multiplex cinema and bowling alley, VIP lounge, poker room, a 250-room boutique hotel, as well as the usual luxury food and shopping staples.

Founded in 1636, Springfield is ancient by US standards, and construction efforts on the new resort -which spans the length of three city blocks – apparently saw MGM do its utmost to honour this legacy.

In his first interview since the mass- shooting at MGM’s Mandalay Bay, the operator’s CEO Jim Murren spoke to the Las Vegas Review Journal of the efforts the company had undertaken in Springfield to renovate and conserve nearby structures.

“We took on the challenge of renovating, preserving, rehabilitating buildings that had been destroyed by a tornado and embracing it into this very rich urban fabric,” he said.
Indeed, one particularly spectacular feat in 2016 saw the operator literally pick-up and move the town’s 129-year-old First Spiritualist Church and relocate it 200 yards down the street, rather than knock it down.

And MGM will be keen to garner all the good publicity it can get in the aftermath of the Vegas tragedy.

But back in New England, MGM has battle-lines o draw. Springfield straddles the border with Connecticut, and thus its latest property faces stiff com- petition from established tribal resorts Foxwoods and Mohegan Sun, who have put in motion plans for a joint venture just across the state-line.

MGM isn’t taking this sitting down – going so far as to place adverts at Hartford, Connecticut Airport. “A casino in the middle of town,” it proclaims its new venture, “not in the middle of nowhere.”

MGM is certainly up for the fight.