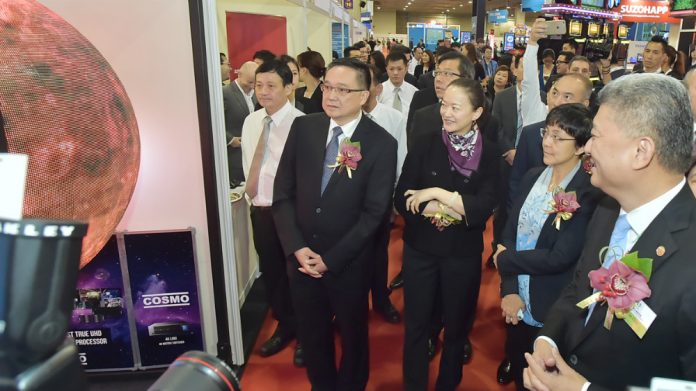 The world’s fastest growing and most diverse expo, the MGS Entertainment Show, sets its sights high as a record number of exhibitors are expected at the Macau exhibition.

The fourth edition of the exhibition, which is owned by the leading 150 entertainment and gaming companies in the Asia Pacific region, is expected to open with a record number of exhibitors, 170 plus, and draw an audience in the region of last year’s high of 12,000.

The organisers, influential trade association and ‘voice of the industry’, the MGEMA, will mark the occasion with a prestigious Opening Ceremony featuring officials from the Central People’s Government (Liaison Office), the Macau SAR Government, representatives from the official sponsoring agency Macao Foundation and leading figures from the Macau and Asian industry.

Supported by senior Macau SAR Government departments – Gaming Inspection and Co-ordination Bureau (DICJ), Macao Trade and Investment Promotion Institute (IPIM), Macao Foundation, Macau Government Tourist Office (MGTO), Cultural Institute of the Macao SAR Government, Macao Economic Services – and backed by the major gaming and entertainment groups in the region – MGS 2016 is hoping to maintain its position as the emergent exhibition on the international calendar in terms of attendance, number of visitors, range of countries attracted and the platform of speakers at its associated summit.

“The show has worked hard to deliver a successful platform for our exhibitors and indeed our visitors to drive business across the continent and worldwide. We have proved our credentials as the ‘Gateway to Asia’ – MGS will bring in the largest contingent of buyers from mainland China and one of the broadest ranges of representatives from the Asia Pacific continent. And the importance of this is proven by the continuing growth of exhibitors and visitors from across the globe.

“On the product side, the show will continue to reflect the most innovative and creative forces within the gaming and entertainment industry. And, through our unique relationship with the Government and the pioneering businesses in our region, it will provide another vital platform for dialogue and exchange of ideas between all the people who have a vested interest in its success.

“Most importantly, and this is vital for us going forward into the future, this week’s show sends out a signal of where we are pushing our boundaries. We have started the process of our very own ‘diversification’ program. Reflective of the vision of the PRC and Macau SAR Governments, and indeed of Governments across the world – the MGS Entertainment Show is looking at the full economic reach of the casino and gaming industry, and drawing in its broader based industries. Technology, creative content, hospitality, systems, processes – everything that drives the infrastructure and the offering of a complete gaming, entertainment and leisure business model.”

“These are not qualities that come easy and quickly. We have worked for four years building this partnership. In truth, MGS 2016 is just the start of something big for us. What we have now is the tip of our iceberg: MGS is thinking big and that aspiration continues this week and beyond.”

For more information on the 2016 MGS Entertainment Show and the associated Summit, visit www.mgsentertainmentshow.com