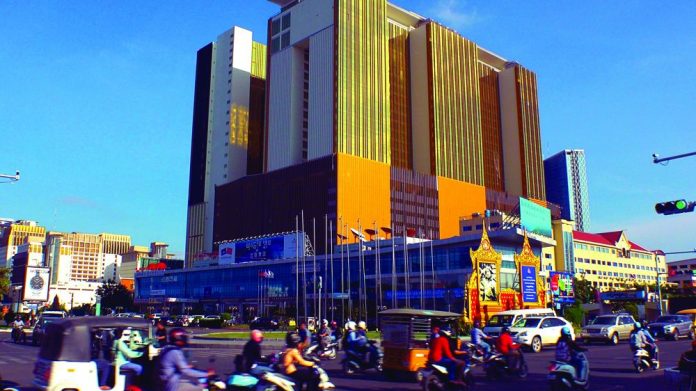 NagaCorp’s gaming monopoly in Phnom Penh will now run until the end of 2045, while analysts suggests the extension will offer the company a greater return profile on the Naga 3 expansion to its NagaWorld casino.

The Cambodian government has extended NagaCorp’s gaming monopoly in Phnom Penh by a further 10 years. The Hong Kong-listed casino operator now holds the monopoly casino gaming licence for the Cambodian capital and within a 200km (124mi) radius until December 2045.

The company made a one off $10m payment to the Royal Government of Cambodia upon signing of the amended agreement.

Alongside this, it will also pay $3m annually each year between 2036 and 2045. “The company believes that the signing of the agreement and exclusivity extension till 2045 may be viewed as a long-term tourism infrastructure project which may generate recurrent revenue to the company and its shareholders,” NagaCorp said in a filing on 19 November.

“The vision of the group is to build the largest comprehensive, multi-entertainment riverine integrated resort in the world.”

The company operates the NagaWorld casino complex in Phnom Penh. NagaWorld – now referred to as Naga 1 – opened its doors in December 2006, with the second phase of the property, Naga 2, launching in November 2017.

In a filing at the start of October, NagaCorp stated the third development phase of NagaWorld will include both gaming and non-gaming elements and will comprise of two 66-storey hotels, two 45-storey hotels, a 48-storey condominium hotel, a threelevel basement and an 11- level multi-entertainment podium.

Back in April, NagaCorp said it expected to invest $3.5bn in Naga 3, which will see the addition of 4,720 hotel rooms to the complex, along up to 800 gaming tables, and 2,500 electronic gaming machines.

More recently, the company stated that the combined capacity of the NagaWorld complex once Naga 3 comes online in 2025 will be around 5,000 hotel rooms, 1,300 gaming tables and 4,500 EGMs.

“It is important to keep in mind that the company’s next project, the approximately US$3.5bn Naga 3, is anticipated to open in late 2025 when the company would have had approximately ten years of exclusivity remaining,” said analyst Grant Govertsen of Union Gaming Securities Asia in a note on 20 November.

“The new agreement therefore extends the runway for Naga 3 and makes the return profile that much better and with greater visibility.”

Moving northwards, Naga- Corp’s IR project in Russia’s Primorye Integrated Entertainment Zone will face additional delays due to a change of construction contractor. “We had to transition to another construction company, so that delayed things,” explained the company’s chairman Tim McNally.

“If you see how far along the structure has gone in the last six to eight months, that may relieve any scepticism, we are 11 or 12 storeys up now. “It’s a very challenging environment at times to work in. Now winter sets in, so there’s always a slowdown period, but we will pick back up and be full speed ahead come springtime.”

Naga Vladivostok is not the only development in the Primorye IEZ, CJSC Shambala and Diamond Fortune are both scheduled to open IRs next year. Despite this, McNally is not concerned about the possibility of over-saturation, nor does he view any conflict of interest with Suncity, which owns a controlling stake in Tigre de Cristal’s operator Summit Ascent Holdings.

“I think the whole area will benefit when we open. It creates a more attractive destination, it creates more energy, and more choices for the visitors there,” McNally continued.

“In one sense you are a competitor, but in other ways you are also a colleague-operator, where both are trying to accomplish the same thing: create an attractive destination; offer a quality product; offer entertainment and the kind of services that will make us competitive with other areas and other regions,” he concluded.