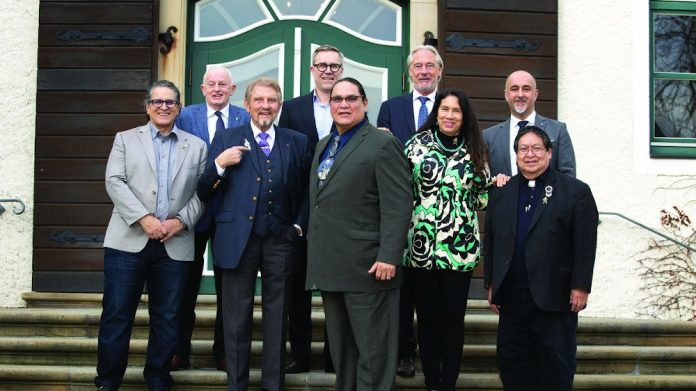 The Gauselmann Group recently welcomed a delegation from NIGA, headed by the association’s chairman, Ernest L. Stevens Jr. Following a comprehensive tour of the East-Westphalian company’s installations and gaming venues, along with discussions with a number of Gauselmann representatives, Stevens met with the group’s founder, Paul Gauselmann, and took the opportunity to thank him for his hospitality.

Prior to this year’s ICE, the Gauselmann Group welcomed important visitors from across the Atlantic. Ernest L. Stevens Jr., who is in his 19th year as chairman of the National Indian Gaming Association (NIGA), travelled to Germany with a delegation of four to get to know the Gauselmann corporate group, the company founder and chairman of the Management Board, Paul Gauselmann, and his native country.

NIGA is one of the most important organisations in the USA, bringing together over 250 Indian tribes which operate almost 500 casinos and over 370,000 slot machines across 29 states.

The NIGA delegation started off their visit in Eastern Westphalia. They visited the Gauselmann Group’s production plant in Lübbecke, the company’s training centre at Schloss Benkhausen in Espelkamp and the German Coin-Op Museum, which is also located on the estate.

The highranking guests experienced German casino flair in the Merkur Casino arcades in Espelkamp as well as at the Bad Oeynhausen casino, where they were given a guided behind the scenes tour. In addition, they made use of their stay to engage in intensive discussions with various company representatives, especially Paul Gauselmann, who invited Stevens along with Jürgen Stühmeyer, Merkur Management Board member, and Athanasios Isaakidis, Merkur’s CEO International, to a personal meeting.

“It is a great honour for us to welcome Ernest Stevens and his delegation to the Gauselmann Group’s company headquarters. Mr Stevens has been passionately campaigning for the concerns of the Indian gaming industry in the United States for decades,” said Paul Gauselmann.

“Thanks to his skill, gaming revenues have been more than tripled in the past two decades. This is a remarkable achievement and a great win for the affiliated Indian tribes, that have been able to use the generated revenues to implement many social projects such as schools, kindergartens and hospitals.

“In addition, I see in Mr Stevens many parallels with my own many years of association work in the German amusement and vending machine industry and am therefore delighted to be able to get to know him better personally,” he added. Following this, the NIGA members spent the weekend in Berlin with Mario Hoffmeister, director of communications, exploring Germany’s capital city and its numerous attractions.

The varied programme was rounded off with a personal guided tour of the German parliament (Bundestag). “We are delighted to have received the invitation to get to know the East- Westphalian Gauselmann Group personally and about the wonderful hospitality shown to us during our stay”, Stevens stated, speaking during the meeting with Paul Gauselmann.

“It was really fascinating to see how the high-quality products of the games makers in Germany are manufactured and, like our casinos in the United States, how they also secure local jobs.”

Following the visit to the Gauselmann Group and the sightseeing tour of Berlin, the guests travelled on to London where the world’s largest gaming exhibition, ICE Totally Gaming, took place from 4-6 February. The NIGA representatives continued their discussions with Paul Gauselmann at ICE where the East-Westphalian entrepreneur gave them a guided tour of the company’s impressive 2,000 sqm exhibition stand.