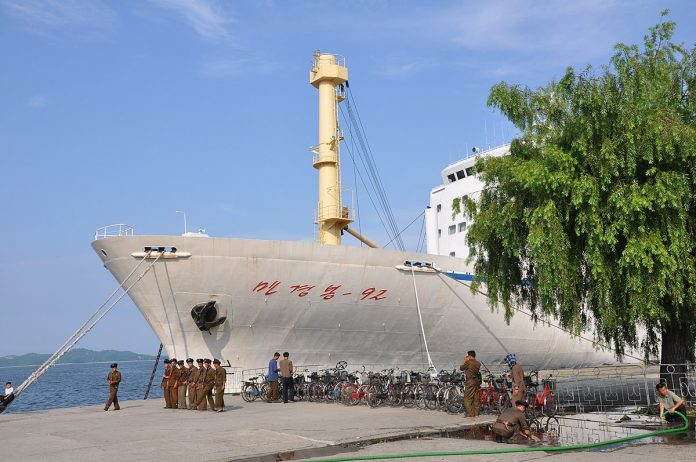 The Hermit Kingdom has launched a new cruise line sailing from the ports Rajin and Kumgangsan to Vladivostok, with officials suggesting that a “more luxurious” vessel could be in the pipeline and the possibility of casino cruising still in play for North Korea.

North Korea hopes to launch itself into the world of cruising with ageing liner, the 9,700-tonne Mangyongbong-92, which is reportedly being operated by a St Petersburg-based company.

The route’s launch is slated to “contribute to the development of regional tourism and bilateral trade,” the Russian consul general in the city of Chongjin, Yuriy Bochkarev, told news agency TASS.

The former cargo ship set sail on its maiden tour in September car- rying around 130 passengers from the port of Rajin, near the China- Russia border, sailing to the Mount Kumgang resort near the South Korean border.

The vessel’s schedule includes four monthly trips from the North Korean ports of Rajin and Kumgangsan to Vladivostok.

Before the launch, the vice mayor of Rason City, Hwang Chol- nam gave a speech recognising the venture as part of the region’s push to attract tourism.

“Any country, people from America, Japanese, Singaporean can come to Rason, that’s the reality today, and that’s the same for the Kumgang special economic zone,” Hwang stated.

“If any foreign companies have an interest in conducting tours they just need to contact our companies.”

Hwang added that his city’s rules allows any nationality to visit the area visa-free, provided the trip is arranged through a designated tour companies.

The goal is to bring as many as 4,000 visitors a day from Rason to Mount Kumgang during the peak summer season, up from the pres- ent figure of 500 per week.

North Korea’s move to attract foreign tourists comes amid a dispute with South Korea over their stalled joint tour programme at Mount Kumgang.

Launched in 1998, the venture gave tourists the chance to visit scenic Diamond Mountain through tours run by the South’s Hyundai Asan Corp., which opened a spa and golf resort there in 1998.

In August, the North expelled the last remaining South Koreans at the resort and said it would sell off Southern assets valued at nearly $320m with the move that prompting criticism from Seoul.

South Korea’s Unification Ministry reportedly plans to send a letter to foreign embassies asking them not to cooperate with any new Diamond Mountain tours offered by North Korea.

Despite this, in September, a New York-based company said it had signed a deal with North Korea to run tours to the Kumgang resort.

Meanwhile, North Korean officials have promised that a “more luxurious” ship capable of carrying up to 900 passengers could possibly be ready by 2018.

Back in March, North Korea appealed for investors on the Mount Kumgang region website, looking to raise funds to buy the 30,000-tonne Royale Star, a Soviet-era cruise ship capable of carrying 1,000 passengers.

The “investment guidelines” on the Korean language site stated that in return for an investment of $10m to $20m the successful foreign company or consortium would be entitled to operate a tourist ship for ten years.

The government also promised special permission to run a casino on the ship, even though gambling remains strictly prohibited in the country.

“We are trying to diversify international tourism at the world- renowned Mount Kumgang by using cruise ship services,” said the proposal, which noted that “a variety of facilities” will be available for passengers.