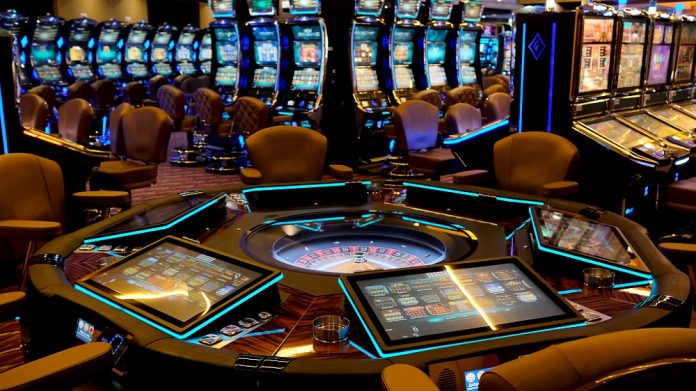 The NOVOMATIC Group has celebrated the opening of its second casino operation in North Macedonia, Casino Hotel FlaminGO.

Since the opening of NOVOMATIC Group’s largest casino, the Casino Hotel FlaminGo Gevgelija in 2014 and its expansion in 2016, NOVOMATIC has firmly established its position as a casino operator in the Balkans. With the new Casino FlaminGo Skopje, the Group has now further expanded and strengthened its casino expertise in the region.

The casino is located in the building complex that houses the Marriott Hotel Skopje, which opened in 2016 directly on the main square of the North Macedonian capital. In addition to the 164-room hotel, the premises are now home to a state-of-the-art casino with an exclusive ambience and state-of-the-art gaming equipment across four levels. In the immediate vicinity are the lively pedestrian area as well as numerous attractions of the city centre.

After about eight months of restructuring work – from April to November 2019 – and investments in the millions, the casino has now opened its doors: featuring some 2,600 sqm with 290 state-ofthe- art gaming machines, a generous live gaming area with 12 tables (6 Roulette tables, 6 card tables), a large bar with an extensive range of snacks and the “Cigars’ Bar”, where guests can take a break in a relaxed atmosphere. More than 130 employees guarantee a smooth operation and premium service.

Fulfilling the highest Responsible Gaming standards, Casino FlaminGO Skopje is the first casino in North Macedonia to be equipped with NOVOMATIC Biometric Systems (NBS): The gaming regulation requires casino visitors to register upon their initial visit to a gaming venue. Revisiting guests can pass the casino access control by means of database verification by fingerprint. This ensures fully automated player protection processes as well as a guaranteed protection of minors through e.g. the denial of access for underage guests or for players who are blocked due to a display of problematic gaming behaviour.

More than 800 guests – including the Mayor of the city of Skopje Petre Shilegov and the Austrian ambassador to North Macedonia Dr Georg Woutsas – came to the big casino opening and were treated to a varied entertainment program as well as culinary delights. Before the official Ribbon Cutting Ceremony, Dr Bernd Oswald, NOVOMATIC Chairman of the Supervisory Board, welcomed the guests and extended the best wishes on behalf of NOVOMATIC founder Professor Johann F. Graf.

To celebrate its opening, the Casino FlaminGo Skopje invited the whole city for a free concert of the legendary band “Bijelo Dugme” and local superstar Goran Bregović on the main square, right in front of the casino entrance. Accompanied by the raging applause of about 25,000 enthusiastic fans, the band played one hit after another.

Regional Manager Milos Pejic, who developed the project together with Aleksandar Simović, said: “With this casino, we have definitely set a new standard in the region.”