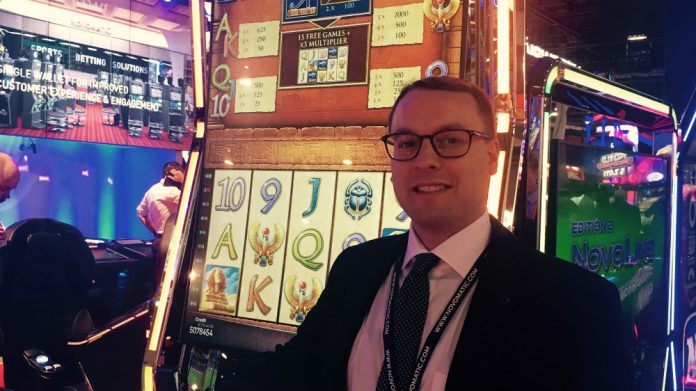 With EGMs geared to both the US and LatAm markets, as well as lotteries, betting and even video bingo solutions – Novomatic truly had all its bases covered at G2E 2016.

[dropcap]W[/dropcap]ith Novomatic still relatively new to the US market, the Austrian gaming group came out all guns blazing at G2E, with 40 slot titles aimed specifically at North American operators.

Indeed, half of the company’s new catalogue consisted of brand-new bespoke games, designed at the recently-opened Illinois headquarters of Novomatic Americas in cooperation with the group’s game development studios.

“Whilst we’re dominant in Europe and Latin America, we’re still new in North America – and so there’s a lot for us to prove,” said Novomatic’s international communication manager Mike Robinson. “However, with our new US-dedicated design team in Illinois under the direction of veteran game designer Matt Ward, I think we’re now in a great position to gain more American market-share.”

Of course, what works in Europe doesn’t necessarily prove popular stateside: a fact of which Novomatic are acutely aware.

“In the US, there’s much more time on device and much lower volatility in games,” Robinson continued. “People like more engagement with bonuses and wilds and higher line games. So we’ve intentionally toned down our volatility for the US market.”

And perhaps the best example of this localisation was epitomised by new Novomatic entrant Tales of Darkness – a series of slot games featuring a themed linked progressive jackpot.

People like more engagement with bonuses and wilds and higher line games. So we’ve intentionally toned down our volatility for the US market

“It’s our headline product for the US market at this year’s show, and has already proved incredibly popular,” explained Robinson. “Whilst we’ve built a reputation for ourselves with multiplayer games in Europe, we’ve looked at the market in the states and seen that single games are far more popular here, so Tales of Darkness represents a firm step in that direction.”

As for future product development from Novomatic Americas, the company has taken stock of the popularity of licensed IP throughout American casino floors, and plans to follow suit in due course.

From the marketing perspective meanwhile, G2E served as the launch platform for Novomatic’s World Championship of Slots. The tournament debuted at the show itself, with competitive rounds held (and prizes awarded) every hour on the Novomatic stand. But the company’s aims for WCS stretched well beyond the confines of the Sands Expo.

“We’re launching this throughout the US, with participating casinos hosting Novomatic slot competitions in their properties,” Robinson explained. “The winners will be eligible to go onto a World Championship of Slow gameshow we’re working to produce, which will be broadcast to 82 million homes throughout the US.”

As Americans are notorious consumers of television, Novomatic will look to the new WCS show as a means of cementing the Novomatic brand name in the public consciousness. But the Austrian manufacturer is also prepared to dig into its pockets in order to attain better position –  through a prospective majority purchase of Australian competitor Ainsworth Technology. On June 27, Ainsworth’s minority shareholders assented to a purchase agreement which would see Novomatic acquire a 53 per cent controlling stake in the company.

“We’re hoping this deal will conclude by the middle of next year, pending all requisite market approvals,” Robinson commented. “Ainsworth already have significant penetration throughout the US, so it’s a logical move for us. If it goes ahead, we envision both brands remaining separate, but there will be a lot of synergies in place in terms of development and market expansion.”

Still, the Novomatic showcase was by no means exclusively the domain of Novomatic Americas. A full 50 per cent of floorspace was dedicated to its many other international markets – which stretch beyond the company’s market-leading position in Europe and into Latin America.

“We see this show as a great opportunity for our customers from both North and South America to conglomerate here and see everything we do,” Robinson remarked. “For international visitors, we’re putting particular emphasis on our VIP cabinets.”

To this end, Novomatic debuted two new luxury products: the NovoStar VIP III and NovoStar VIP Royal cabinets. Also being pitched primarily at audiences outside the US was the newly unveiled the Gaminator Scorpion, successor to the company’s popular Gaminator cabinet.

And that wasn’t all. Also to be found on the Novomatic stand were products from both its growing Lotteries and Sports Betting Solutions divisions, as well as from its latest acquisition –  Barcelona-based video bingo specialist Otium.