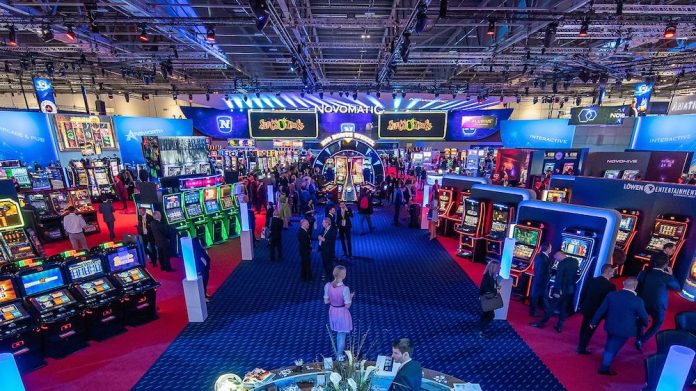 The firm once again had the largest trade show presence with more than 5,000m² of stand space. The group expects consolidated Group revenues in 2018 rise to EUR 5.0 billion with the number of employees remaining constant at around 30,400, of which 3,200 are located in Austria.

Austria’s leading gaming company participated with more than 20 subsidiaries at the world’s largest gaming fair, ICE Totally Gaming, in London. NOVOMATIC presented product highlights for the various industry segments and specific markets, from land-based casinos to AWP and street markets as well as online & mobile. Also a range of solutions for sports betting, specific Bingo products, server-based systems, casino management systems and cash handling products, as well as market-specific products from Group subsidiaries in the UK, the Netherlands, Spain and Germany, were on show.

“NOVOMATIC offers one of the most comprehensive product portfolios in the industry, enabling us to cover every segment of the industry,” said Harald Neumann, CEO of NOVOMATIC AG at a press conference during ICE. “As a producer and operator of gaming technologies, we have the opportunity to test and optimize new products in our own gaming establishments and in various markets,” explained Mr. Neumann.

In London, NOVOMATIC presented a number of brand new slot games such as the new game Lucky Lady’s Wild Spell™ which premiered on the PANTHERA™ Curve 1.43 and V.I.P. Lounge™ Curve 1.43 cabinets. This game features the popular Lucky Lady character in a big upright game format with an entirely new Wild feature. The show also saw the international launch of the IP game MacGyver™ on the NOVOSTAR® V.I.P. 3.50 and the compact V.I.P. Lounge™ 2.32 cabinets. Another new game that has already been highly successful in the online market, has now been transferred to the land-based offer: Apollo God of the Sun.

Also premiering at ICE was the new PAY DAY concept – with the first two titles, Prized Panda™ and Prize of the Nile™ – both featuring six progressive win levels. Linked Progressives continue to be a major topic at the NOVOMATIC stand and advancements to the NOVO LINE Novo Unity™ II electronic table games offering were also showcased at the fair. New modules for the Octavian myACP casino management system, such as GDPR and Anti Money Laundering functionalities, were also presented. Another highlight, specifically for the UK market, was the BIG BONUS WHEEL from Astra which made a standout appearance at the centre of the stand.

The digital interactive segment has been one of the fastest growing sectors in the gaming industry for years, driven by ever more powerful mobile devices for consumers. The NOVOMATIC Interactive division Greentube welcomed ICE visitors to the “Home of Games”, showcasing its strength in the interactive gaming space with new slot titles including the highlight launch of The Great Gambini’s Night Magic and the latest gaming solutions.

The innovative Greentube solution Plurius™ presented seamless gameplay and single wallet capabilities between land-based, online and mobile, demonstrating how players can switch between devices on the fly. “The customer should be able to play a game seamlessly on a mobile device, at a computer or in a gaming venue,” said Mr. Neumann.

Furthermore, the Plurius™ system was connected to the NOVOMATIC Biometrics Systems (NBS) solution and showcased a new multi-level jackpot at the show. By using biometric data in the gaming industry, the firm is setting new trends in customer convenience and measures to prevent gaming addiction. The patented NBS technology is already being used on gaming machines in Europe. NOVOMATIC is thus one of the first gaming technology groups worldwide to have created the technical prerequisites for the introduction of a biometrics-based access and payment system.

During the show, Mr. Neumann also traditionally gives an initial assessment of the previous fiscal year of the NOVOMATIC Group. As Mr. Neumann reported, the group expects consolidated revenue of EUR 5.0 billion for the 2018 fiscal year (2017: EUR 4.9 billion). The group includes – in addition to NOVOMATIC AG – the Swiss companies ACE Casino Holding AG and NOVO Swiss AG. The number of employees of the Group worldwide reached 30,400.

In the current fiscal year, NOVOMATIC is focusing on growth in its core segments of gaming technologies and operations as well as on sports betting. The firm is also pursuing a strategy of international expansion in this sector and plans to build on its already strong position in Europe. At the same time, NOVOMATIC’s sports betting activities are to be expanded in the US.

The NOVOMATIC Group has seen strong growth in recent times, primarily through strategic acquisitions. The company now has 300 shareholdings, around 220 of which are consolidated in the balance sheet of NOVOMATIC AG. “Following the strong growth of recent years, we will continue to focus on consolidation and increasing synergies between the companies in 2019,” highlighted Mr. Neumann.

Operators rally for US national and state lotteries to go digital