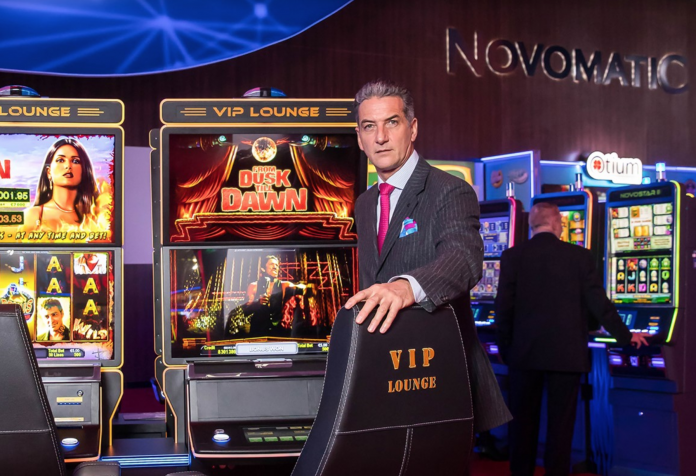 Novomatic set the stage for another strong year at ICE 2018, presenting a wide range of innovations from a total of 25 group companies.

“With this trade show appearance, which was again the largest, Novomatic continues to prove that as a full-service provider, we are among the world’s leading gaming technology groups,” said Novomatic’s CEO, Harald Neumann.

Another highlight at the show was the Enchanted Fortunes Linked Jackpot, which presents Novomatic games on a linked progressive.

Following its introduction to the US market at G2E last year, the licensed title, From Dusk Till Dawn, made its international omni-channel debut at ICE on the Novostar V.I.P. III cabinet, as well as on tablet and mobile devices.

Meanwhile, the group also showcased a number of themed games based on the Batman, Austin Powers, and Sherlock Holmes licences.

Additionally, Novomatic received two awards during this year’s ICE, being recognised as “Casino Supplier of the Year 2017” at the Global Gaming Awards London, and “European Casino Operator of the Year” at the British Casino Awards.

Speaking at the show, Neumann made an initial assessment that for the 2017 fiscal year the Novomatic Group – including both Novomatic AG and the Swiss companies ACE Casino Holding AG and Gryphon Invest AG – will generate an accumulated revenue of E4.8bn, a nine percent rise on 2016’s results.

“NOVOMATIC AG itself will also be able to report a record revenue again this year, with figures increasing by a further ten percent compared with 2016 (E2.3.bn),” said Neumann, speaking at a press conference on 6 February.

“The most important event of the year, however, was the completion of the acquisition of a 52.2% stake in Ainsworth Game Technology.

“The group now has over 300 companies, with about 80 of these being acquired over the past two to three years. We will use this year to consolidate our business and then continue after the next one or two years with another round of acquisitions.”

The Novomatic Group also achieved a new record in terms of headcount with around 29,500 employees.

Talking about the AGT acquisition, Ainsworth’s CEO Danny Gladstone, said “It really is a remarkable coming together, I couldn’t emphasise what a big job it was and I wish to extend my congratulations to all the people from Novomatic, because it was a huge combined effort.”

“Being part of this larger unit compliments everything that Ainsworth has done and to have the resources of the Novomatic Group is both a plus for Ainsworth and for the industry.”

Neumann clarified that while both companies “will continue as they are in the near future”, there are plans to develop a common technical platform.

“Having grown a lot over the past few years, we will this year focus on increasing synergies between companies and, correspondingly, on more effective internal structures,” he added. “Nevertheless, we will continue to watch the market and make purchases, where it makes sense.”

International Casino Review: How has this year’s ICE been for Novomatic?

Mike Robinson: It’s been extremely busy. We have 25 companies represented on Novomatic’s 4,700sqm stand this year and it’s been fantastic.

We’ve generated a great deal of interest and met with a lot of customers, from both the UK and Europe, as well as around the world.

Just prior the show, we also completed the acquisition of approximately 52 percent of Ainsworth Game Technology on 5 January, and this will be a major area of focus for us to build on in 2018 as we expand internationally, particularly in the Americas.

ICR: You’ve launched four new cabinets at the show, could you tell us more about these?

MR: We unveiled the Panthera and the Panthera Curve for the first time at ICE 2018. The Panthera has two 27” monitors, a 15.6” touchdeck, an optional topper – and is completely 4K ready. Featuring a great design with attractive LED lighting, which is fully immersive with the game, the Panthera is available with a wide selection of titles on the Novo Line Interactive and Impera Line platforms.

This cabinet is a perfect fit for any venue, from smaller properties up to large-scale integrated resorts. At ICE this year, we are showing the brand new Novo Line Interactive Edition 10 mix on the Panthera, featuring a brand new player selection interface, which is highly intuitive and attractive for players.

Meanwhile, the Panthera Curve offers a single 43” curved screen, and likewise, is completely 4K ready and includes the 15.6” touchdeck and optional topper.

On the Panthera Curve at this year’s ICE, we are displaying six titles connected to the Enchanted Fortunes Linked Jackpot, our linked progressive jackpot solution.

The fourth cabinet we’re introducing for the international casino sector is the Grand Roulette II and is based on the Gaminator Scorpion. It’s a single game roulette combining a mechanical roulette wheel.

ICR: The Enchanted Fortunes Linked Jackpot is a leading product at the show this year, could you tell us more about it?

MR: The Enchanted Fortunes Linked Jackpot is one of the many highlights for us at the show, and we are presenting the jackpot with large signage featuring high-impact content from Novomatic Media Technology.

We are showing six titles at ICE connected to the linked progressive, with some special versions of Novomatic classics such as Book of Ra Mystic Fortunes, in addition to new titles Pyramid Fortunes and Vampire Fortunes, along with other games such as Goddess Rising and Treasure of Tut.

The games feature different variations of math models and are all very integrated into the jackpot itself – and we’ve already had a lot of positive feedback from visitors at the stand.

A current trend in the international casino space is linked progressives and is certainly an area we’re going to continue developing in the near term.

The opportunity to win bigger prizes is very attractive for players, while casino operators have seen that linked progressives perform extremely well, and that’s generating a lot of interest.

ICR: Could you give a bit more detail on Greentube’s recent deal with Hard Rock?

MR: Greentube is going to provide customised social gaming solutions for Hard Rock and Seminole Gaming properties, and each social casino will be customised per-venue. It’s a landmark deal, Hard Rock is a very recognisable brand in hospitality as well as in the casino space, and we’re very happy to announce this at ICE.

We have already deployed the Greentube Pro social gaming solution at other venues in the US, including Foxwoods Resort Casino in Connecticut, Mount Airy Casino Resort in Pennsylvania, and Treasure Island Resort and Casino in Minnesota.

Foxwoods, which is the largest casino resort in the US, has been a notable success, and we’ve now deployed some of our land-based products there as well. This reflects the benefits of our omni-channel approach, and players now have the opportunity to play Novomatic content both on the casino floor, as well as online via the social casino.