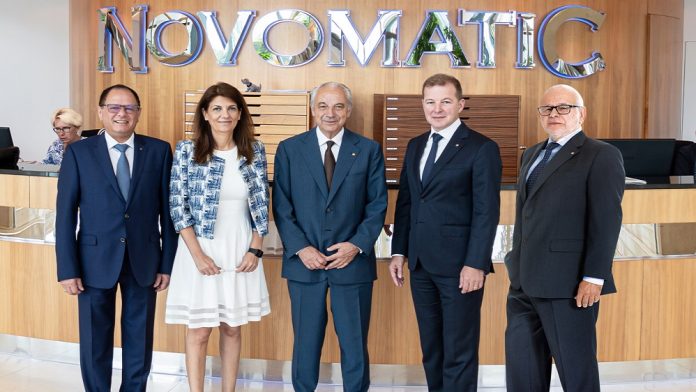 NOVOMATIC Italia has announced a new composition for its board of directors as the company looks to build on its already substantial market commitments.

Italy is a stimulating market for the NOVOMATIC Group, despite the increasingly stringent
fiscal pressure. Italy’s horizon is expanding, now more than ever, towards growth and expansion opportunities – with a new Board of Directors that will steer NOVOMATIC Italia
to further development and success.

Italy is the largest European gaming market in in terms of number of active gaming machines, a fact that is reflected by the NOVOMATIC Group’s sustained commitment to this market and the latest decision to promote a new course with a strategic restructuring and nomination of a new board of directors.

The new board of directors is headed by chairman Franco Rota who has been part of the
management team since the market entry in 2007. His vision has allowed the Group to become a key player in the VLT sector, as a provider of proven NOVOMATIC gaming technologies and games to all Italian VLT concessionairies.

He said: “It makes me proud to see how in almost 12 years NOVOMATIC Italia has grown to become a leading provider of services and technologies of all kinds. There is no segment of the Italian gaming market that we haven’t scrutinised to deliver highly specialised and advanced know-how. It is a great achievement to see that today the company that started out in 2007 with a handful of employees, has become a large enterprise with 2,800 staff.”

Olga Rodrigo’s recent nomination as chief executive officer demonstrates how experience and competence meld with the multinational nature of the Group. Her professional career has seen her in the Italian gaming sector since the enactment of the regulatory system, gaining a deep knowledge of the Italian market, both of the regulations and of the complexity of the players that compose the system of Italian legal gaming.

After a key role in her country of origin as CFO of NOVOMATIC Spain, Olga Rodrigo has now returned to Italy. She said: “I am very happy to put my enthusiasm and my expertise at the service of NOVOMATIC Italia. The NOVOMATIC Group proves its commitment to Italy as one of the most important countries in Europe. It is therefore essential to consolidate and increase our market leadership by leveraging synergy and collaboration: I am sure that only by working together and sharing common goals, we can obtain the expected results that can allow everyone to feel like active protagonists in their own professional reality.”

He said: “I was able to actively contribute to the fantastic growth of the Group from the beginning – and also throughout delicate times for the Italian legal gaming sector, from the fiscal and regulatory point of view. I feel a great responsibility to all my colleagues and to our reference stakeholder, the mother company, and I am proud of the work done in recent years. It is essential to continue working together and to face the objective difficulties of the whole sector with a spirit of teamwork and the necessary motivation to make a difference compared to our competitors.”

The new constitution of the board of directors was augmented by a new personality, Karl Plank, who joined the top management as COO. A renowned entrepreneur of the Italian gaming industry made in Italy, he became part of the NOVOMATIC family in 2008 with the take-over of Allstar.

“It is an honour for me to be on this board of directors,” he said. “My commitment will be focused on the gaming operations, with the aim to develop a collaborative work so that NOVOMATIC Italia becomes a best practice example for the legal Italian gaming sector. Not only as far as the gaming offer is concerned but also with regard to the best practices in terms of Responsible Gaming, from the environmental point of view but also as an employer.”

Bartholomäus Czapkiewicz, CTO NOVOMATIC Italia since June 2017, commented in the same vein, emphasising the value of teamwork, recognition and trust in the skills of each resource.

“We are working towards a process of organisational simplification, towards responsibility and the valorization of everyone’s abilities”, said Czapkiewicz. “We strongly believe that the key to success lies in technological evolution and in taking new roads, confirming the pioneering,nature of the Group, and being the forerunner in innovation.”

With these strategic players and entrepreneurial concepts, NOVOMATIC aims to spearhead a new scenario in Italy, developing long-term objectives for the Group to benefit from every possible regulatory situation, through the synergic commitment of all the realities.