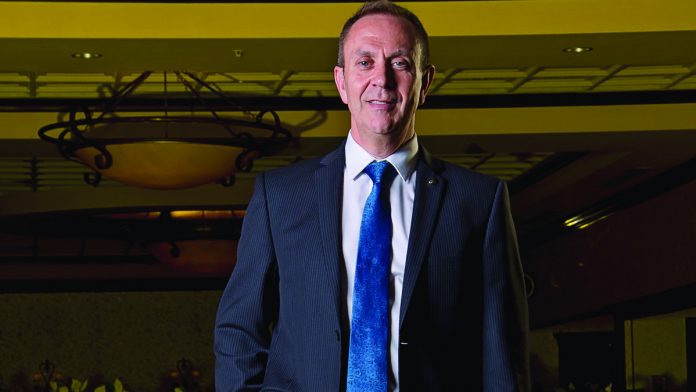 Latin America continues to offer a diverse and competitive marketplace, and the Argentinian market looks particularly promising, according to Novomatic’s Lawrence Levy.

[dropcap]W[/dropcap]ith sales offices across the American continent, as Novomatic’s senior vice president for Central and South America, Lawrence Levy’s position offers him a broad overview of the region. While Novomatic operates casinos in Peru and Paraguay, currently its principal focus in Latin America is on sales and distribution.

Speaking at this June’s Juegos Miami Levy praised the event’s networking opportunities, one of which was sponsored by Novomatic. “I think the conferences at Juegos Miami have been extremely successful and the round tables have offered a good opportunity for discussion of the region’s diverse markets,” he said.

“In terms of these markets, in South America at the moment we’re interested in the new online regulations coming into law in Colombia in addition to their VLT market, and we’re looking at similar things in Mexico and Argentina,” said Levy.

During his time with the company, Levy has seen significant changes in the Latin American industry landscape. “When I joined Novomatic in 2009, it was unique because it was the only company that offered a multi-game platform that people actually played.

“Now the rest of the manufacturers have gone on to develop similar platforms of their own, they’ve found ways to do it successfully, and so from that point of view, the market has become increasingly competitive.

“But we’re developing all the time, we’re working on new platforms and, of course, everyone is moving into HD. We’re looking at new products to address the growing group of millennials in the region as well as keeping content fresh for core players.”

In general, the Latin American markets are well regulated, they have very strong anti-money laundering regulations in most of the countries I cover and additionally there’s a growing awareness of problem gambling

Within this context, Levy suggests that regulation is essential to ensure that businesses are competing on a level playing field.

“In general, the Latin American markets are well regulated, they have very strong anti-money laundering regulations in most of the countries I cover and additionally there’s a growing awareness of problem gambling,” he said.

“While certain markets such as Peru and Chile are quite strict in terms of their certification and homologation rules, we see that as a positive trend because more control is good and other countries including Colombia are now looking at introducing similar regulations.”

Argentina’s rapidly developing gaming market which has seen 70 per cent growth since 2007 is a key point of interest for Novomatic.

“Right now, our eyes are on Argentina, where we’ve already seen a lot of success with Pinball Roulette™ since currency and importation restrictions have changed in the country. It was an extremely complicated market to import and sell to, but now we have a much greater opportunity than before and over the next few years we aim to increase our market share slowly but surely.

“The Argentinian market is very different, in terms of revenues per slot machine per day. It’s way ahead of the rest of South America.”