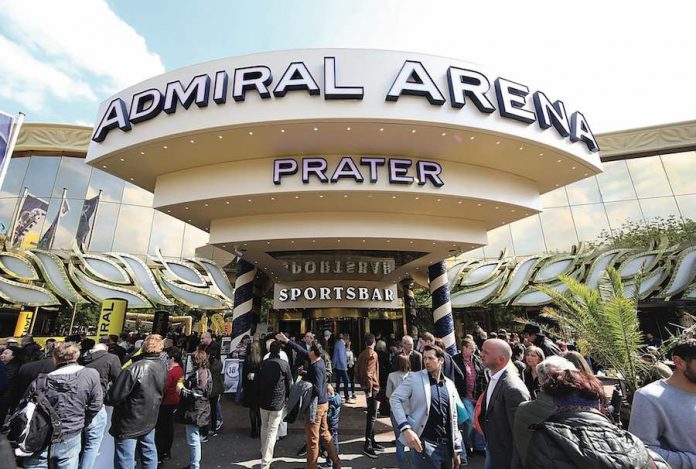 Situated in a central Vienna location, Admiral Arena Prater opened at the beginning of May following six months of conversion work to become the largest sports bar in Europe.

HTM Hotel und Tourismusmanagement GmbH and Admiral Sportwetten GmbH affirm that they aim to set a “new standard in the entertainment sector” with the launch of the venue.

At the centre of the venue, reminiscent of an American sports bar, there is a large, semi-circular bar with a 15 sq m LED wall offering high definition picture quality.

Another LED wall – at 42 sq m is one of the largest such walls in Europe – extends along the back wall, allowing sporting events to be broadcast in supreme quality from 9 am to midnight daily.

This main wall is the size of a small flat with an approximate length of 15m and height of 3m, weighing around 2 tonnes.

The wall consists of 180 individual panels with a total of 4,608,000 LED image points, while around 6 km of cables were laid to operate the two LED walls. The main wall can also be split into many different screens thanks to Novomatic- developed software.

“This means that, for instance, all Champions League games playing at the same time can be broadcast together – this broadcasting possibility is unique in Europe,” said Novomatic’s CEO Harald Neumann.

The interior furnishings are also exceptional and exclusive in Austria, permitting guests to take a seat on comfortable furniture designed to reflect different sports, such as baseball, tennis or football.

Around 70 betting terminals and a dedicated horse racing area are available for use by guests.

A selection of Grand Prix race courses can be tested on a Red Bull Racing Seat, and an entertainment stage is available for all kinds of events.

The high-tech furnishings around the whole arena enable every event to be broadcast simultaneously across all screens and LED walls.