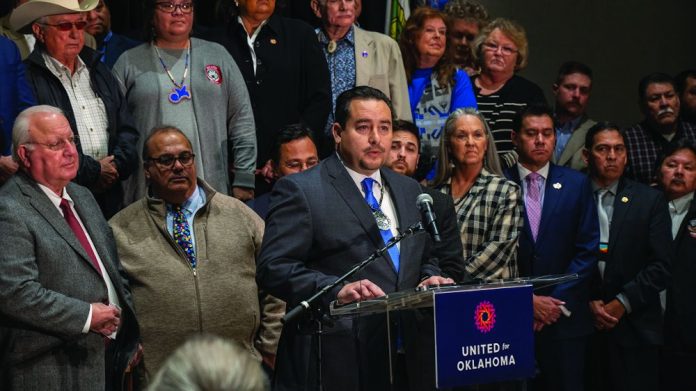 As the clock struck midnight on 31 December, there was no sign of a settlement in the ongoing dispute between Oklahoma’s governor Kevin Stitt and tribal operators over whether the Sooner State’s gaming compacts include an evergreen clause. Edward Lowton discusses the issue.

The saga of Oklahoma’s gaming compacts dragged on through the new year without any further clarity on the issue. Things kicked off back in July 2019 when governor Kevin Stitt asserted in an oped that the state’s gaming compacts with tribal casino operators would expire at the end of the year.

The announcement met with scorn from the Sooner State’s tribal nations who contended that the agreements would automatically renew on 31 December. “Oklahoma’s governor surprised the Tribal governments with an op-ed announcing his intention to ignore the evergreen clause in the gaming compacts,” said Oklahoma Indian Gaming Association chairman Matthew Morgan, speaking to Casino Review last year.

“Suffice it to say he had been ill-informed, and our membership has rightly spent a great deal of time and effort correcting that narrative.” Fast forwarding through to December, Stitt’s efforts to bring the tribes to the negotiating table failed to bear fruit, with tribal leaders sticking to their guns.

In a joint news conference on 19 December, the leaders of Oklahoma’s gaming tribes were unanimous in their rejection of the governor’s proposal to extend the state’s tribal gaming compacts for eight months to provide more time for negotiations.

“The leadership and members of the Tribal Nations in Oklahoma stand united in our position to honour the plain language of our gaming compacts, which were presented by the State of Oklahoma 15 years ago.

“Because the State has time and again taken the action required to trigger the automatic renewal of our mutually beneficial compacts, there is no need for an extension,” stated Morgan. In a subsequent letter to the governor on 22 December, signed by 32 tribal leaders, the trade body did not pull any punches.

“We are particularly concerned about your authority to offer an extension of the Compacts. The People enacted the model Compact as an act of legislation and through their legislation offered it to our Nations and Tribes.

We see no participation by the Oklahoma Legislature in what is clearly an attempt to materially amend State law. We decline your unauthorised offer of an extension.” Stitt’s case against automatic renewal was never particularly strong.

In addition to the shakiness of his argument, Stitt’s mishandling of the dispute has been particularly glaring. From announcing a significant policy shift via a newspaper article, to trying to strong-arm to the tribes into renegotiating, the governor can hardly be said to have covered himself in glory over the past seven months.

December provided a further example of the governor’s high-handed treatment of the tribes with Stitt raising the possibility of opening up Oklahoma to commercial casino operators if a deal can’t be reached on the gaming compacts.

“One operator explicitly told me over the phone he’d sign a deal tomorrow at an 18 percent fee, and this business person is eager because his offer is a low rate for what his casinos are paying on average across the nation,” he told Tulsa World.

“Commercial operators are reading the news headlines in our papers and in industry trade publications, and they are wanting a chance to break into the third-largest casino market in the nation,” Stitt continued.

“While this is something I am not pursuing with the Legislature at this time, the conversations have been enlightening about the value of the gaming industry in Oklahoma.”

This proclamation proved to be the final straw for Oklahoma’s secretary of Native American Affairs, Lisa J. Billy, who turned in her resignation on 23 December. Her departure is all the more damning given that the gubernatorial cabinet position was created by Stitt and Billy was the first to hold the post.

“It has become increasingly clear you are committed to an unnecessary conflict that poses a real risk of lasting damage to the State- Tribal relationship and to our economy,” wrote Billy in her resignation letter.

“You have dismissed advice and facts that show the peril of your chosen approach and have remained intent on breaking faith with the Tribes, both by refusing to engage with the compact’s language and, more recently, by suggesting you would displace our Tribal partners with private, out-ofstate commercial gaming operators.” Morgan described Stitt’s remarks as disappointing.

“Any commercial operator that is out of state isn’t living here, isn’t investing here, isn’t working together hand in hand with local communities to better Oklahoma,” he contended.

Meanwhile, Stephen Greetham, senior counsel for the Chickasaw Nation, said commercial gaming would breach the compacts if it was to be allowed and result in a $150m annual loss for the state in exclusivity fees. “I don’t know what to make of governor Stitt’s public comments,” he admitted.

“They are all over the map.” Wayne Greene raised a pertinent point regarding the amount of money involved in the dispute in an op-ed for Tulsa World. He highlighted that the tribes paid the state a record $148.2m for the fiscal year 2019, around just a quarter of the amount the state’s existing taxes grew in 2018.

“What’s the best-case scenario for the governor? …If the state were to double the amount it got from the tribes, it still wouldn’t catch up with the corporate income tax or six other state taxes,” Greene observed.

“Stitt is risking a lot politically for a potential revenue increase that is roughly one quarter of the amount the state’s existing taxes grew last year.” It’s a good point. At the time of writing it looks increasingly likely that if the Stitt administration continues to force the issue, it will ultimately wind up in Federal court.

Stitt himself recently acknowledged that the courts “may have to …decide the issue”, but one can’t help but wonder if before the situation is finally resolved, the governor will pause to ask himself if it’s really all been worth it.