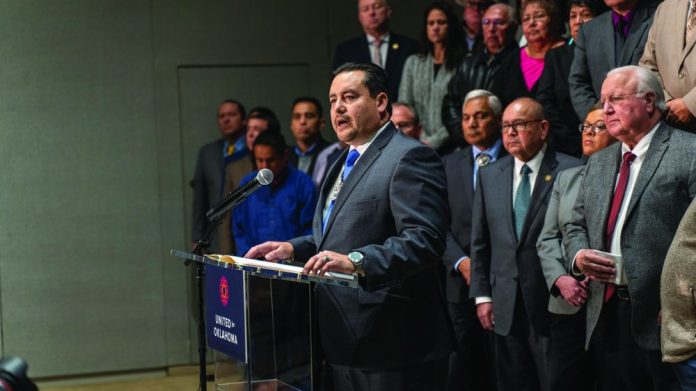 For those following the story, it came as no surprise that just a few days into the new year, the dispute over Oklahoma’s gaming compacts finally boiled over into litigation. Governor Kevin Stitt contends the Sooner State’s gaming compacts with the tribes expired at the start of 2020, effectively making class III gaming illegal in Oklahoma.

On 31 December, the Cherokee, Chickasaw and Choctaw nations filed suit in federal court against the Oklahoma governor, seeking to clarify whether the compacts automatically renewed with the new year and confirmation that neither the governor nor his representatives can interfere with tribal gaming operations.

“We’re asking a federal judge to answer the question, does the compact renew? We believe it renews, outside observers believe it renews, every tribal leader in the state believes it renews. The governor does not. And that’s why we had to go into federal court.

“As we welcome the new year, Cherokee casinos will continue to do business as usual,” he continued. “I want our customers, our vendors and the staff at our casinos to know that we are confident in the auto-renewal of the gaming compact.”

While two tribes, the Kialegee Tribal Town and the United Keetoowah Band of Cherokee Indians, ultimately opted to sign an eight-month compact extension to continue negotiating with the state, 32 tribal leaders roundly rejected the offer from the governor in a letter on 22 December.

“We are particularly concerned about your authority to offer an extension of the Compacts. The People enacted the model Compact as an act of legislation and through their legislation offered it to our Nations and Tribes.

We see no participation by the Oklahoma Legislature in what is clearly an attempt to materially amend State law. We decline your unauthorised offer of an extension,” said the letter drafted by the Oklahoma Indian Gaming Association.

Responding to the legal challenge by the three tribes, Stitt asked the court to declare the gaming compacts did not automatically renew, and has requested an injunction stopping the tribes from offering Class III gaming.

The move met with criticism from the Chickasaw Nation which affirmed the state would not be permitted to conduct its own audit of the tribe’s gaming operations. “We believe you misapprehend the State’s role in these matters,” wrote the tribe’s gaming commissioner, D. Scott Colbert, in a formal response. He observed that the language of the compact “does not authorise State financial audits”.

Instead, the state is entitled to a copy of the report of the tribes’ financial audit and to meet with the auditors, he explained.

Former attorney general Drew Edmondson said Stitt’s intention to audit the casinos is likely to come up during litigation. “There are items in the compact that give the state the authority to examine the machines, to review the audits that have been done.

The question is whether that can be extrapolated into the authority to audit themselves, and that’s where the tribes are saying, no it doesn’t go that far,” he stated.

State officials involved in drafting the compacts have also poured cold water on Stitt’s arguments against an evergreen clause in the compacts. In November, former state governor Brad Henry said that, contrary to his successor’s claims, the compacts were designed t