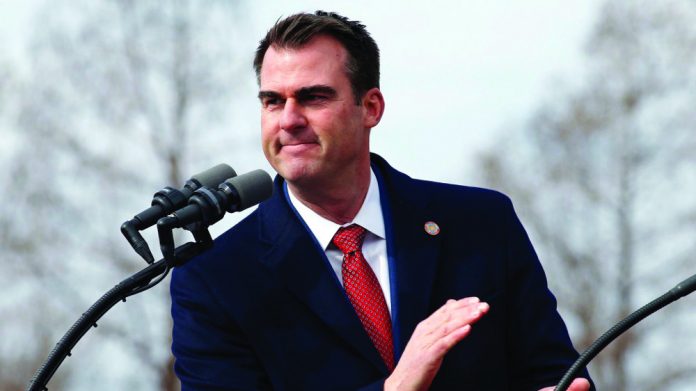 Following criticism from Oklahoma’s tribal operators and politicians, state governor Kevin Stitt appears to have moderated his rhetoric and has proposed ‘tabling’ the controversial issue of compact expiration. Nonetheless, he has still called for talks with the state’s 35 tribal operators at the beginning of September.

Oklahoma governor Kevin Stitt has called for talks with the Sooner State’s tribal operators, while he has recently moved to downplay the thorny issue of compact expiration.

Last month, the governor announced plans to renegotiate the state’s gambling agreements with the tribes as part of a push for a bigger slice of gaming revenue.

Nevertheless, despite the apparent climbdown, Stitt has still proposed holding talks with the 35 local tribes which operate casinos on 3 September.

“I propose we table the issue of the renewal or termination date of the existing compact, and use our time more productively by focusing on coming to a shared vision of gaming in Oklahoma for the future,” he told tribal leaders in a letter on 13 August.

The governor has designated attorney general Mike Hunter “to be an active leader on behalf of the State in these discussions alongside my office” and has proposed hiring a mediator to facilitate the talks.

“Experience has taught us the immense progress we can achieve when the State of Oklahoma and the Tribes of Oklahoma work together,” he wrote. “I am committed on building on that legacy and invite the Tribes to engage in meaningful discussions about gaming in Oklahoma to advance our shared commercial and economic interests.”

Hunter has had prior experience negotiating with the tribes. In the 2016 he successfully worked out an agreement between the state, Oklahoma City, the Chickasaw Nation and the Choctaw Nation regarding water usage in south-central and southeastern Oklahoma.

“I very much appreciate the governor’s trust and confidence in our office and look forward to working with him, legislative leadership and tribal leaders to forge an agreement we can all take pride in and benefit from,” Hunter stated.

First announced via an oped in Tulsa World on 8 July, the governor’s call for compact renegotiations drew the ire of the state’s tribal operators.

“The recent action of governor Stitt puts into question his sincerity to work with us in a cooperative manner moving ahead,” said a joint resolution by the Inter-Tribal Council of the Five Civilized Tribes (ITC) on 12 July.

Quapaw Nation chairman, John Berry, took issue with the tone of governor Stitt’s op-ed, arguing that it failed to recognise “the true value of the tribes”.

“Native American tribes are one of the largest employers in the state. We provide benefits to our employees. We’re probably the most philanthropic group in the state,” he contended.

However, the governor’s most controversial assertion was that Oklahoma’s tribal gaming compacts will not automatically renew after they expire in January 2020, and given this, the state and the tribes must come to fresh agreements.

In a response last month, leaders of 29 American Indian tribes notified Stitt in writing that, in their view, they are not obligated to renegotiate, but emphasised they will listen if he puts forward a proposal.

“I think tribal leaders were caught off guard about how governor Stitt announced that he intended to renegotiate. The first mention that tribal leaders got of his intention was through that op-ed,” Oklahoma Indian Gaming Association chair Matthew Morgan explained.

“I think they were also caught off guard on his view that the compacts terminated on 1 January should the parties not be able to come to an additional agreement. He has I think been misinformed.”

“Federal law says that …under gaming compacts the state has to offer something of value to the tribe in return for receiving those revenue share payments,” he continued.

“That’s our question to Gov. Stitt at this point. …If you would like to talk about games being offered or the fee payment arrangement, what are you offering?”

In July, Morgan said the possibility of sports betting legalisation “is a topic of conversation” when it comes to compact renegotiation, but noted that the “economic incentive” it represents “will vary from tribe to tribe”.

While Native American legislators acknowledged there was no harm in trying to renegotiate the compacts in the six-month window before they expire, they criticised the governor’s handling of the issue.

“Governor Stitt has approached this in completely the wrong way,” he said. “He’s acting as though these are not sovereign nations and are rather simply employees of his company. I think that’s the wrong way to go about doing this,” said state representative Collin Walke.

“There are more beneficial ways of …seeking revenue for the state of Oklahoma than looking toward the tribes,” he said, adding that reinstating higher income tax rates on the state’s top earners would be a more effective way of boosting revenue instead of renegotiating the compacts.

According to data from the state’s Office of Management and Enterprise Services, Oklahoma’s tribes paid the state a record $139m in exclusivity fees last year.

Meanwhile, state representative Mark McBride clarified that while he understood the economic rational behind wanting to take a fresh look at the compacts, he did not condone governor Stitt’s tack.

“I can see wanting to look at the compacts and explore the possibility of raising them, but I just don’t agree with the approach that was taken,” he stated.