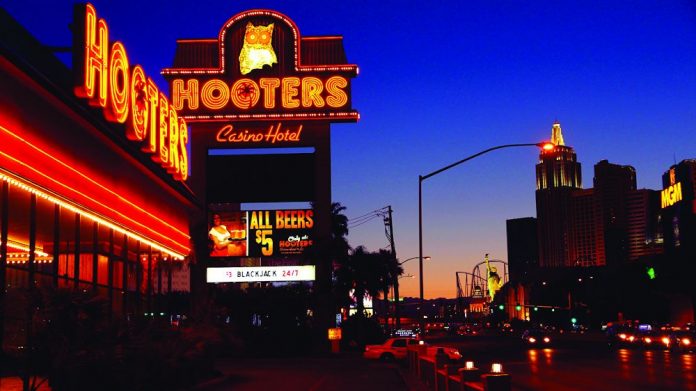 OYO and Hooters look set to be a match made in heaven, Sheldon Adelson eyes Japanese capital, while commentators have questioned whether Thomas O’Connell racino proposal in Massachusetts will make it past the first hurdle.

The company’s first property in the city, the 657- room casino resort will be rebranded the OYO Hotel and Casino Las Vegas, with refurbishment works expected to be completed by the end of the year.

Highgate, a US hospitality investment firm that partnered with OYO on the purchase, will take over the management of the hotel, while Nevada-based Paragon Gaming will continue operating the 35,000sq ft casino.

“We are excited to cater to a completely different audience segment and are certain that this will be the perfect start to OYO’s journey in Las Vegas,” said OYO founder and CEO Ritesh Agarwal in a statement.

The company currently operates 112 hotels in the US across more than 60 cities. The Japan Times reports that Las Vegas Sands has confirmed that it is no longer interested in bidding for an IR licence in Osaka.

The company will instead focus its bid on a site nearer the capital which it feels will offer a better return for investors, Sands’ chairman Sheldon Adelson said in a statement 22 August. “We think an investment in Tokyo or Yokohama gives us the best opportunity to do exactly that.”

In passing on an Osaka bid, Sands leaves the field open for other integrated resort companies. Partners MGM Resorts International and Orix Corp. had previously declared an “Osaka-first strategy”, while Melco Resorts and Entertainment, Wynn Resorts, and Galaxy Entertainment have also expressed interest in an Osaka IR bid.

Developer Thomas O’Connell has unveiled a $300m proposal for a horse racing and gaming facility in Wareham, Massachusetts. According to Common-Wealth Magazine, the development would feature a new thoroughbred race course with a mile-long track, while the company estimates the project would create 1,000 full-time jobs.

The slots parlour – which O’Connell affirms is necessary for the proposal to be feasible – is a big ask, given that the state’s current gaming law permits only three resort-style casinos, two of which are currently operating, MGM in Springfield and Wynn Resorts in Everett, along with a lone slots parlour, Plainridge Park in Plainville.

O’Connell has called on the state legislature to modify the law to allow a second slots parlour. “The market has changed since the casino law was written,” he explained, adding that in his view it was unlikely a further resort-style casino would be built in south eastern Massachusetts region due to the risk of market saturation.